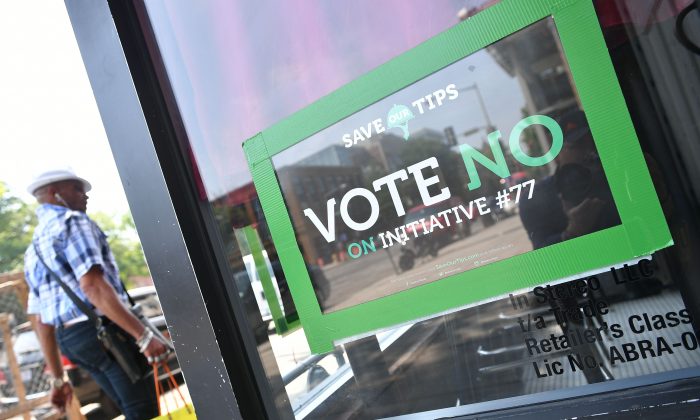 WASHINGTON—Less than a month after District of Columbia voters approved a referendum to raise the minimum wage paid to tipped service employees, such as restaurant servers and parking attendants, seven members of the city council introduced a measure on July 10 to repeal it.

On June 19, the voters approved Initiative 77 by a 55 to 45 vote. The initiative aims to phase out the tipped wage. Under current law, if an employee’s tips do not raise his or her wage to the current minimum wage of $12.50 per hour, then the employer has to make up the difference.

Under Initiative 77, the tipped wage would gradually be replaced by a set minimum wage. Right now, the minimum wage for tipped employees is $3.33 an hour. This would be increased by $1.50 each year. By 2026, employers would be required simply to pay the non-tipped minimum wage, which would be $15 at that time.

The initiative follows a District of Columbia law passed in 2016 that raised the minimum wage for non-tipped employees to $15 an hour.

Mayor Muriel Bowser and a majority of the Washington city council oppose Initiative 77. They are joined by the restaurant industry and many tipped employees, who fear they might lose income.

The website for One Fair Wage, the Washington group that backed the initiative, says that female restaurant servers have to endure sexual harassment in order to ensure they received good tips.

The group also says that enforcement is so lax of the requirement that restaurant owners make up the difference between tips received and the regular minimum wage that “wage theft is rampant in the restaurant industry.”

Opponents of the initiative believe it will lead to less take-home pay for servers, while restaurants will be forced to raise prices and cut staff.

No action on the proposed law repealing the initiative is expected until the fall.