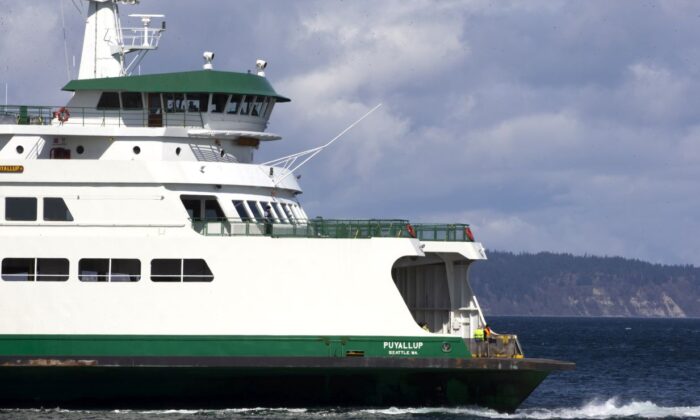 A Washington State ferry pulls up to the dock on March 29, 2020 in Edmonds, Washington. (Photo by Karen Ducey/Getty Images)
Regional News

Washington State Ferries (WSF), which provide service around the Puget Sound in western Washington, suffered significant staff shortages over the weekend, officials said. And on Monday, the service’s website went down for several hours.

Sterling said that about 28 workers called in sick on Oct. 9, which he described as not unusual. However, there were no substitutes to replace them, which State Ferries spokesperson Ian Sterling described as “pretty unprecedented,” local media reported.

“There is no one to fill in,” Sterling said, according to goSkagit.

Between Oct. 8 and Oct. 9, about 140 sailings were canceled due to the system’s staffing shortages, officials said.

In a Twitter post on Oct. 8, WSF wrote that “although COVID-19 restrictions have not allowed us to hire or train new recruits at the same rate as prior to the pandemic, we’ve brought on 100+ new crewmembers in 2021.” It added: “We used to hire new crews once a year before summer. We are now continuously recruiting new employees.”

While WSF didn’t make mention of a statewide COVID-19 vaccine mandate going into effect for state workers on Oct. 18, some theorized that ferry workers were calling in sick to protest. The Epoch Times has contacted WSF for comment.

“What you see today is the direct result of the mandates, people refusing to show up to work,” Republican state Rep. Andrew Barkis told MyNorthwest. “Whether this is a protest, whether it is a taste of what’s to come here in the next week, this is very concerning.”

Ryan Brazeau, a spokesman for the Inland Boatmen’s Union, disputed Barkis’s claim by telling KIRO that the vaccine mandate likely isn’t to blame for the shortages.

“I think it’d be shocking to everyone if people gave up these jobs,” Brazeau said. “They’re great jobs, they’d be giving up a pension, a retirement, and all that comes with it.”

Retired ferry Capt. Ken Burtness, however, said that if workers went on strike or quit en masse, “it wouldn’t take much to cripple the system,” reported KING-5.

Washington Gov. Jay Inslee, a Democrat, signed an order in August mandating COVID-19 vaccines for most state employees, requiring them to receive the shot by Oct. 18.

On Monday, meanwhile, WSF wrote that it was dealing with a website and phone outage.

“Our website remains down with our schedules, alerts, cameras, and mobile app unavailable. We apologize for the inconvenience while technicians work on the outage,” it said on Twitter hours before it confirmed that its website is now “coming back up.”