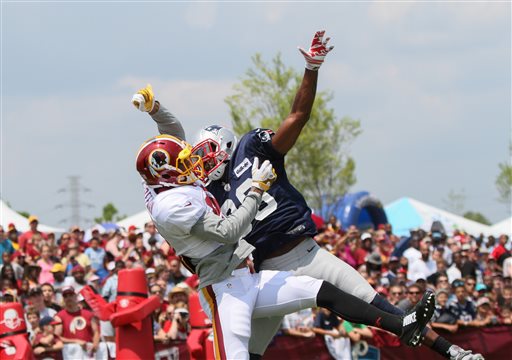 The Washington Redskins and New England Patriots are set to play on Thursday night after days of practicing against each other.

The teams are playing at the Redskins’ home stadium, FedEx Field. Kick-off is scheduled for 7:30 p.m. EDT.

The game will be broadcast on Channel 4, WBZ in Boston and Channel 22, WWLP in Springfield, as well as NBC-4/Comcast SportsNet in the Washington, D.C. area.

It will also be broadcast on Channel 12, WPRI in Providence, Channel 8, WTNH in Hartford, Channel 8, WMTW in Portland, Channel 7, WVII in Bangor, Channel 3, WCAX in Burlington, and KFVE or Channel 5 in Hawaii.

Live streaming will be available via NFL Preseason Live, which costs $20 for all preseason games and enables out-of-market viewers to watch on demand or live.

Coach Jay Gruden said in a statement on the Redskins website that the preseason game are important for evaluating the roster.

“It’s [the] early stages of our evaluating process, but we do have a good feel for the guys, but only time will tell,” Gruden said. “You have to let the games be the main evaluator, not just coming out here in shorts at walkthroughs and practice. So the games are going to be a major part of how we evaluate the bottom half of the roster and the backups and the depth of our team.”

Next week, the Redskins will play the Cleveland Browns on Monday night (August 18) while the Patriots will take on the Philadelphia Eagles on Friday, August 15.

See a Associated Press story below.

WASHINGTON—Metro says its rail system will stay open an additional hour to help riders get home from the Washington Redskins’ preseason game at FedEx Field.

Metro says event organizers will pay for an extra hour of service on Thursday when the Redskins play the New England Patriots. The game begins at 7:30 p.m.

Metro says riders should enter the Largo Town Center or Morgan Boulevard stations near the field no later than 12:20 a.m. to make sure they make the last trains. Metro normally closes at midnight on Thursdays.

Metro says the entrances at other Metro stations will close at their normal times, but riders will be able to exit all stations during the additional hour of service.