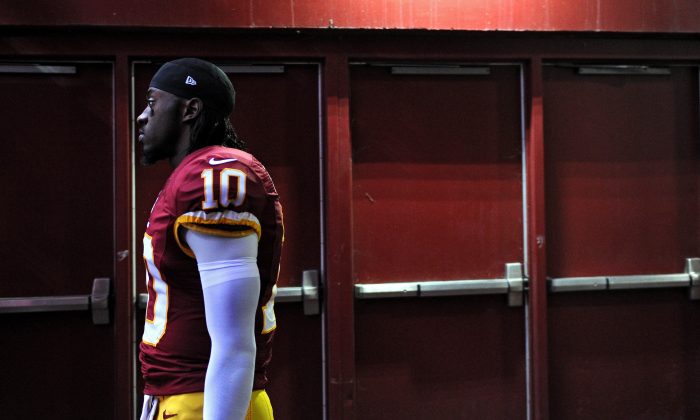 The Washington Redskins are in scramble mode after starting the season 1-3 and need a couple of wins to right the ship.

Cousins is filling in for the injured starting quarterback.

“I wouldn’t have a panic [attack]. I’m not going to scream for Colt McCoy,” said Cooley. “But I’ll tell you, there’s another quarterback on this roster that didn’t hate seeing that.”

However, others disputed that take.

Cousins Has to Improve

The Washington Times notes that regardless of the Griffin support, Cousins has to improve.

“Well, it’s worrisome,” coach Jay Gruden said of the interceptions. “You have to take the game for what it is. We lost the game. He didn’t play very well. He threw four picks. We understand that. He fumbled. But, he didn’t have a lot of help, either.”

“You know, there’s a lot of other factors that we could have had a better game, a better outing, if other people were helping him more. It’s not just Kirk. Kirk, his mistakes are magnified, obviously, but other guys had mistakes that were equally as important and devastating to the football game.”

“We’ve just got to make sure he sees the throws a little bit better and his eyes are in the right spot,” he added. There’s a couple of them that he stared down the receiver and the safety just came down and made an easy pick. One of them he just had bad location on the ball to Ryan Grant, and the other one, he threw a blind one on an out route when he was throwing to Andre Roberts and the nickel was sitting right there and he never saw him — which you have to see on those throws. He’s got to get his eyes in the right spot and got to calm down.”

And the latest report claims that Griffin could be playing for the Dallas Cowboys by this time next year.

USA Today claims that if Cousins has a Pro Bowl season this year, and Dan Snyder sees that Cousins should stay the starter, and that Tony Romo’s back problems get worse, then a trade could happen.

“Griffin grew up less than three hours south of AT&T Stadium and has his own statue in front of Baylor’s new facility, which is just 100 miles away. If the Cowboys offered significantly more in return than any other possible suitor (let’s say their 2015 first-round pick and their 2015 and 2016 second-round picks), would that be enough to convince Snyder and team president Bruce Allen to risk sending him within their division? Considering Griffin is only under contract through 2015, with a team option for 2016, it’s hard to see why not,” it said.

“There are enough potential circumstances to prevent the above steps from ever happening, the most likely being that Griffin gets another chance to reclaim the starting job once his ankle heals. But it’s certainly an intriguing scenario to think about, isn’t it Cowboys fans?”

The Redskins drafted Crawford in 2012.

Redskins.com noted that Crawford made some big plays in his rookie season for the team and is ready to be a playmaker again.

“Just interceptions, punt returns and creating turnovers,” the cornerback said when asked of what he wants to accomplish from an individual standpoint in 2014. “That’s what I did when I was here – be a playmaker and create havoc and problems for the offense. “Then on special teams make tackles, be a good returner and create turnovers on special teams also. That’s also a big aspect of my game is playing special teams. I know that so that’s also what I plan to do.”

The Redskins have already given up a lot of turnovers, and definitely need to cut down on those, but they also need to increase takeaways on the defensive side.

“The Redskins already are at a minus-5 in turnover ratio. That’s the tied for the worst in the NFL,” said Real Redskins.

“They probably won’t have many more six-turnover games like they had against the Giants but if they are going to get into plus territory they are going to have to start taking the ball away with greater frequency.

“The Redskins have just four and after Sunday’s games 20 teams had more. If you’re going to build your defense around sacks and turnovers, well, you’d better get some turnovers.”