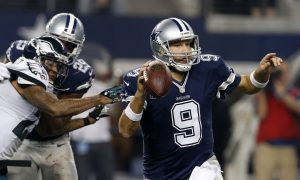 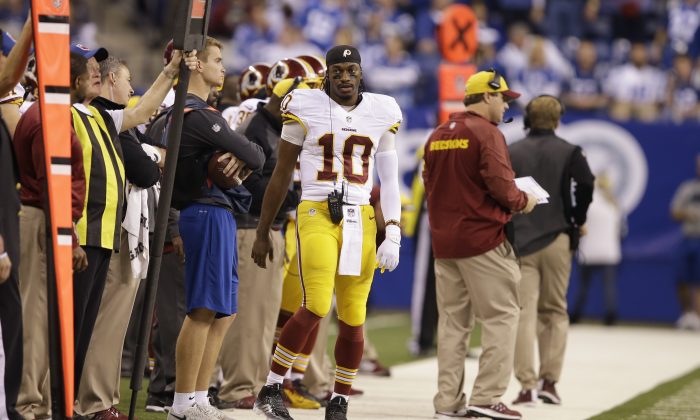 Washington Redskins quarterback Robert Griffin III on the sideline during the second half of an NFL football game against the Indianapolis Colts Sunday, Nov. 30, 2014, in Indianapolis. (AP Photo/Darron Cummings)
NFL

The Washington Redskins are trying to finish the tumultuous season with a couple more wins before looking ahead to next season.

For the Rams, the trade has turned out nicely.

Through the draft picks it got and corresponding moves, the team has added a total of eight players.

Fisher noted the Rams have three defensive starters, a running back, an offensive lineman, and a wide receiver due to the deal.

“We’re building our team to compete in the division and I feel like we’re making strides. That’s one of the questions we wanted to have this year,” he added.

“We played Robert early his first year and he made a lot of plays, and to get that team into the playoffs as a rookie is pretty impressive,” Fisher said. “Unfortunately for him, he’s dealing with an offensive scheme change and he’s had injury. Those two things [from] a quarterback standpoint are just hard to overcome. I think he’s an outstanding talent and very hard to defend.”

As for the seemingly impending trade, a number of teams have been listed–including the Rams.

“The best fit might very well be the team that traded away the chance to acquire Griffin in the first place. The Rams have recouped a bounty for their decision to trade away the second overall pick three years ago, but the one thing they failed to come away with as part of that deal is a viable starting quarterback. Sam Bradford’s injuries should force him out of town this offseason, and while the Rams appeared to have stumbled onto a starter with Austin Davis, the franchise soured on him quickly enough to run back to veteran retread Shaun Hill two weeks ago,” according to Grantland.

“The Rams also are good enough and have an easy enough schedule over the next five weeks (with games against Oakland, Washington, and the Giants) to likely finish somewhere in the lower half of the top 10, a spot that could preclude them from getting one of the draft’s top-rated passers.

“Given that they’ve had so many draft picks over the past three seasons by virtue of the Griffin trade and the subsequent deals the Rams made with those picks, they are perhaps best positioned to send a mid-round selection to Washington for Griffin, even after dealing a fourth- and sixth-rounder to the Buccaneers in October for Mark Barron.”

Other potential suitors include the Oakland Raiders, the Philadelphia Eagles, and the Buffalo Bills.

McCoy Could be Long-Term Solution

Colt McCoy couldn’t get the win against the Indianapolis Colts and didn’t play especially well, but he could be a long-term solution for the team.

ESPN analyst Steve Young said, when asked if Griffin, McCoy, or Kirk Cousins is a long-term solution for the team, that any of them could be.

Young referenced his own career and Drew Brees’s development after he was traded to the New Orleans Saints as two examples of quarterbacks who take a few years to get going.

“The good news is that I think that Jay Gruden is one of the guys that understands quarterback play in this league,” Young said. “That’s unusual. There’s not 32 great places for quarterbacks in the league. My opinion is, since Mike [Shanahan] got there, and now Jay, both of them are great spots for quarterbacks.

“The guys on the roster…they gotta go to school. Some are ahead of others in the master’s program and I think the capitulation that Robert needs is that, my game is a play-making game and I need to transition it to the true job in the NFL, which has been proven to me over many years, and was proved to me individually, that the job is to deliver the ball from the pocket, to own the pocket, use the data and manage it and perfect it, and have reflexive recall and go win a championship from there.

“So that’s a process for everybody. Ninety-nine percent of the people that come into the league never get there. Colt can develop into that kind of guy, and so can Robert.”

The pair were “within arms length of one another” most of the night, reported CSN.

Wozniacki, who had a high-profile split from golfer Rory McIlroy earlier this year, declined all interview attempts.