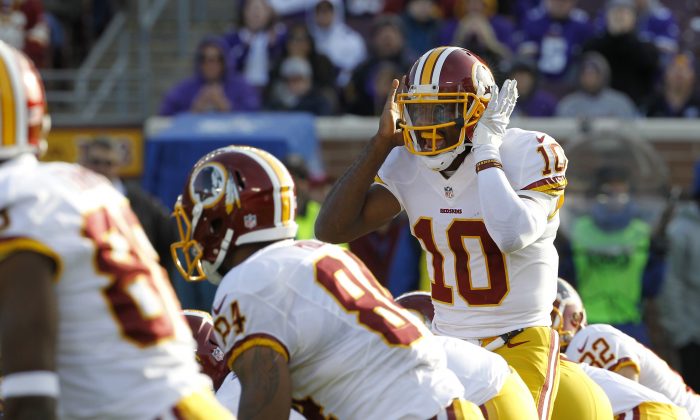 Washington Redskins quarterback Robert Griffin III (10) calls out a play during the second half of an NFL football game against the Minnesota Vikings, Sunday, Nov. 2, 2014, in Minneapolis. (AP Photo/Ann Heisenfelt)
NFL

The Washington Redskins are set to take on the Tampa Bay Buccaneers on Sunday and desperately need a win.

Jackson to be an X-Factor Against Bucs

The Redskins definitely need a win against Tampa Bay, and if they get one then Jackson will be a big part of it.

“The Buccaneers have yet to halt or even slow down a potent offense this season, and RG3 and Jackson are certain to exploit a questionable Buccaneers’ secondary on Sunday. RG3 should be sharper in his second start back and expect to see a heavy dose of Jackson, who is Washington’s X-factor in Week 11,” noted Rant Sports.

Jackson has been the one constant on offense despite getting throws from three different quarterbacks.

His 21.8 yards per catch leads every single player with at least 15 receptions this season, and is easily the team’s leading receiver.

“Now in his seventh season, Jackson is on pace to surpass his career high of 1,332 yards a year ago. He enjoyed success against Tampa Bay last year while with the Philadelphia Eagles, hauling in six passes for 64 yards and two touchdowns in a 31-20 Eagles win,” the blog added.

“With no one capable of keeping up with him on Sunday, Jackson should have another field day against the Buccaneers this time around.”

The Bucs defense can still disrupt the Redskins, and the chief threat is defensive tackle Gerald McCoy.

The former third overall pick can be a menace and will need to be held in check.

“McCoy is used as a penetrating defensive tackle, playing the 3-tech role that former Buccaneers great Warren Sapp used to play. This technique gives McCoy more one-on-one matchups in both the run and pass game,” reported the Washington Post.

“He’s a difficult defender to block in the run game, particularly with the zone-blocking scheme. There are a few ways zone teams will block a 3-tech, but McCoy has shown he can beat them.”

Griffin can help by flipping the run call to go away from McCoy on some plays. The linemen will also need to aware of McCoy on passing plays, because he’s a good rusher as well.

“McCoy is a powerful defensive tackle … The Redskins’ interior offensive line has struggled to slow down and stop stronger tackles, making this a good match up for McCoy and Tampa Bay,” the Post concluded.

“Much of the Redskins game plan will focus around how to stop McCoy. But if they can handle McCoy, they should negate a big portion of the Buccaneers’ pass rush, which lacks another consistent threat outside of McCoy.”

Griffin Speaks About Unity and Leadership

Asked if it really matters whether he’s liked by his teammates, Robert Griffin III had the classic turn-the-tables response.

“Do you like everybody you work with?” he responded to the reporter.

The Redskins quarterback went on to say that winning is “really not even about that,” that it’s more about other topics that several veterans have stressed, such as: “We can’t let anybody try to tear us apart from the outside in.”

Griffin conceded Wednesday that there were “a few out of the group” of his teammates who might have not been in favor of his regaining the starting quarterback job two weeks ago after Colt McCoy led back-to-back victories.

Those few were the target of a brief unity speech delivered by usually quiet receiver DeSean Jackson last week before the team split up for a bye week vacation.

“Who those guys are, we don’t really care,” Griffin said. “The thing that he stressed and the thing that we are stressing is that we’re focused on winning.”

All the talk about unity and leadership in the locker room is the sort of thing that comes with a 3-6 record, which is now an annual occurrence in Washington.

Or, as fullback Darrel Young put it this week: “If we win, there’s no talk about leadership. End of conversation.”

Joining in that chorus on Wednesday was a leadership voice that has been mostly quiet this season.

Nine-year veteran nose tackle Barry Cofield is back on the active roster after spending eight weeks recovering from a severe ankle sprain and groin surgery while on short-term injured reserve. He said he’s kept a public silence because it’s hard to set an example while standing on the sideline.

“From a leadership perspective, I just want to lead by example,” Cofield said. “I’m just going to be honest — I feel it can be overstated.

“I’m kind of on DY’s level: When you’re winning, no one worries about it. No asks you who are the leaders. … Maybe the difference between the team that wins and loses the Super Bowl is a great leader that just brings something to the table, but the difference between being 3-6 and the playoffs is not speeches. It’s not having somebody to look at that you consider a leader. It’s really about individuals doing their job better, so we need to start there.”

For what it’s worth, Griffin said he feels the Redskins are “getting closer as a family.”

“I don’t know everything, that’s for dang sure, but I do know a little thing about changing the culture,” Griffin said. “And it takes everybody from the top down. The players have to be willing, and I think we’ve got guys in that locker room that are willing.”

Coach Jay Gruden echoed the sentiment, saying the media coverage of the team’s leadership issues has, if anything, strengthened some bonds.

“I think since it came to light with y’all saying that we weren’t a unified locker room, (that) we didn’t have leaders, I think it kind of maybe made people think about it and realize we’re OK — maybe,” he said, adding a chuckle.

“I think that’s the case. I think there’s some guys that are more willing now to step out of their shadow and maybe speak up a little bit more than maybe they would’ve. … We don’t have any leadership problems in my book, and the locker room’s been united as far as I can tell.”