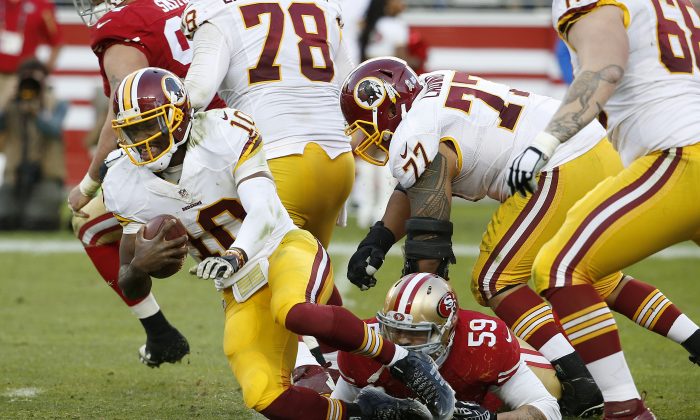 The Washington Redskins lost again and are facing more and more questions as the news and rumors ramp up.

McCoy to Start Over Griffin: Source

A source says that Colt McCoy will start over Robert Griffin III on Sunday against the Indianapolis Colts.

The source told Adam Schefter of NFL.com the news.

But Griffin is still very much in the Redskins’ long-term plan, another source said.

“Yet right now, Washington is hitting the reset button, though it might not last long, a source cautioned. Washington has high hopes for the coming off-season,” Schefter said on Tuesday night.

“For the first time since it surrendered three first-round picks and one second-round pick for the right to draft Griffin III, the Redskins will have their full allotment of picks in addition to room under the salary cap. Behind owner Dan Snyder and general manager Bruce Allen, the team will be positioned to strike this off-season, spend big-time dollars and improve its roster.

“Plus Washington hired Jay Gruden in large part for his stellar work with quarterbacks, and the team is convinced coaching, cash and patience can help turn Griffin back into the player who won the Heisman Trophy and Offensive Rookie of the Year in back-to-back seasons.

“But for now, it has been a battle. Griffin III is coming off his most challenging NFL outing at San Francisco, where he was battererd in the pocket and struggled when he did have time to throw. It forced Washington to consider a change that is expected to become official Wednesday, when Gruden meets with reporters.”

Gruden had told reporters on Monday that he intended to start Griffin but wasn’t certain.

Asked several different ways whether Griffin will start against the Colts, Gruden hedged each time, citing the need to review the struggles of the passing game before making a decision.

“Right now, we have every intent for Robert,” Gruden said. “But we’ll look at the tape and make our evaluations here shortly.”

Gruden wasn’t as hard on Griffin as a week earlier, but the facts speak for themselves. The Redskins (3-8) are 0-3 since Griffin returned from an ankle injury and have scored only one touchdown in each of the last two games. He is 4-14 as a starter since the start of the 2013 season.

Following a conservative game plan after a terrible outing the week before, Griffin completed 11 of 19 passes for 106 yards and was sacked five times in Sunday’s 17-13 loss to the San Francisco 49ers. He has been sacked 16 times in his last three games, more than Kirk Cousins and Colt McCoy were sacked in their six starts combined. Third downs continue to be a problem: The Redskins are 1 for 41 when it’s third-and-10-or-more this season.

“We can’t attribute it all to Robert,” Gruden said. “He is the quarterback, though, so we’ll have to look at every avenue and figure out where we can improve.”

The first-year coach might have to resolve the dilemma of playing to win the next game vs. playing for the future of the franchise. McCoy, who had won two straight games before Griffin returned, might give the Redskins their best chance to beat the Colts, but there’s the argument that Griffin needs to keep playing to prove whether he can operate something akin to a conventional NFL passing game.

“We have a 24-year old kid who has not had a lot of these concepts thrown at him,” Gruden said. “And you’d think we got it all sorted out, but he hasn’t seen these concepts against different coverages all the time. He’s still in a growing process, he really is. He wasn’t perfect in the game, there’s some things he could’ve done a lot better, but there’s some things our left tackle could’ve done better, our center, our right guard, our wide receivers. Everybody has a little hand in the mess in the passing game yesterday.”

That said, Gruden kept opening the possibility that a change at quarterback might be necessary.

“We have some issues, we just have to hone in on them and … come up with a plan that’s conducive to winning with the quarterback that we feel good about moving forward,” Gruden said. “To have 100 yards or 80 yards passing is unheard of this day and age with the receivers we have, and we have to figure out something.”

Moses Shouldn’t Be on Field

The rookie lineman Moses shouldn’t even be on the field, according to the Washington Post.

“Well, Redskins coaches knew they would be in big trouble this season if rookie tackle Morgan Moses had to play a significant role. Moses is not ready, which was crystal clear again against the 49ers,” wrote Jason Reid.

“On speed moves, edge rushers beat Moses way too easily. And for Moses, it’s not just technique problems. Moses lacks the necessary awareness and focus to consistently protect a right-handed quarterback’s blind side.

“On the Redskins’ final play from scrimmage, Moses whiffed against 49ers defensive lineman Justin Smith, who crushed Griffin, causing a fumble that Ahmad Brooks recovered. Moses should not be on the field. It’s as simple as that.”

Morris returned to form with 125 yards and a touchdown, an important sign for the offense and the future.

Bleacher Report notes that the running, which included a season-long run of 30 yards and another scamper of 22 yards, opened up the defense to passing, even if that aspect of the game wasn’t successful.

Griffin, or whoever plays quarterback next Sunday, needs to take advantage of this if the Redskins are to be successful.

“That’s what makes Morris’ personal revival great news for Griffin. It sets up more opportunities to target the kind of routes Jackson ran here [on a play action]. The quarterback also hit Garcon for over 20 yards on a similar play earlier in the game,” the report added.

“Targeting quick-hit crossing patterns is one of the few things Griffin tends to do very well as a passer. In fact, he’s generally more effective when he gets the chance to play quickly and instinctively.”

Establishing the run helps create play-action, and that helps create moving pockets. It also sets off the Redskins best passing plays, which feature one receiver running vertical while another cuts across underneath.

Gruden said, as reported by Redskins.com, that the team needs to keep feeding Morris.

“That’s very important and we’re going to rely on that,” Gruden said. “We have to rely on that for us to be any kind of successful team in the future. Moving forward, I think we have to get our running game going and Alfred has been running really hard the last few weeks.”

Morris himself said that he feels he’s improved since the beginning of the season.

“Each week has been getting better and better,” Morris said. “That is just the type of guy I am anyways. As the season goes along, as the game progresses, I feel like I get stronger and stronger.”