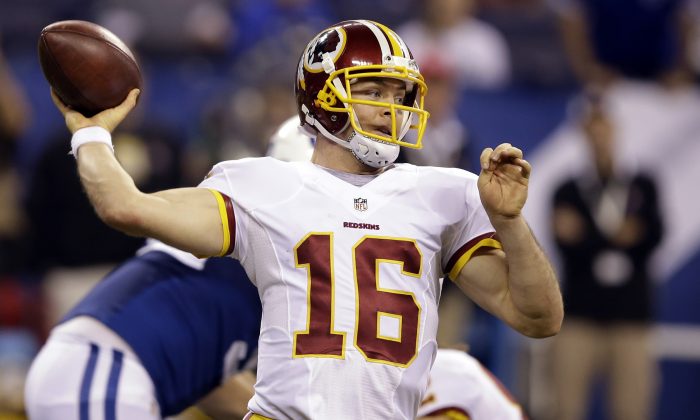 FILE - In this Nov. 30, 2014, file photo, Washington Redskins quarterback Colt McCoy throws a pass against the Indianapolis Colts during the second half of an NFL football game in Indianapolis. McCoy took part in the full Redskins practice Friday, Dec. 12, 2014, getting all of the first-team snaps to stay on pace to start Sunday's game against the New York Giants. (AP Photo/Darron Cummings, File)
NFL

The Washington Redskins will play the New York Giants on Sunday. Here’s some of the latest updates:

Colt McCoy will again start for Washington on Sunday against the Giants.

He was cleared by doctors after suffering a nerve injury against the Rams last week.

However, he practiced all week and took every first-team snap on Friday, according to ESPN.

“His decision-making is the best right now because he’s been in the NFL the longest,” coach Jay Gruden said of McCoy.

He added, “His ability to see coverage, get the ball out, probably sets him ahead of the other guys by a little bit. That’s really the No. 1 reason. He still has the mobility, obviously. He’s a tough guy. He’s a good leader, and players respond to him.”

He was asked during a press conference if Griffin could do better in a different offense.

“I don’t know what offense they are talking about,” Gruden, according to The Washington Post. “As far as offenses that I have studied in the National Football League, we all run similar dropback concepts. Not everybody runs the zone read.

“We run the zone read to try to help him out. We run a lot more play-actions and bootlegs than most teams. . . . If you play quarterback in the National Football League, you’re going to have to drop back and throw it.”

Gruden added that Washington needs a quarterback who can make decisions faster and not take sacks.

“We’ve got to eliminate the negative plays. We’ve got to have a great familiarity with our system, [know] where people are on the field and [play with] some anticipation,” Gruden added.

ESPN analyst and former coach Jon Gruden said his brother Jay is in the middle of a mess in Washington.

“All that combined has made a mess in Washington, and you’re right, unfortunately my brother’s in the middle of it, and I wish him luck,” Jon Gruden told ESPN.

He added that the team needs to get its quarterback situation in order first and foremost.

“The Redskins aren’t there yet, and they need to find, A, who their quarterback is, and, B, they need to find a nucleus of players they can win with, and all that combined has made a mess in Washington, and you’re right, unfortunately my brother’s in the middle of it, and I wish him luck,” he said.