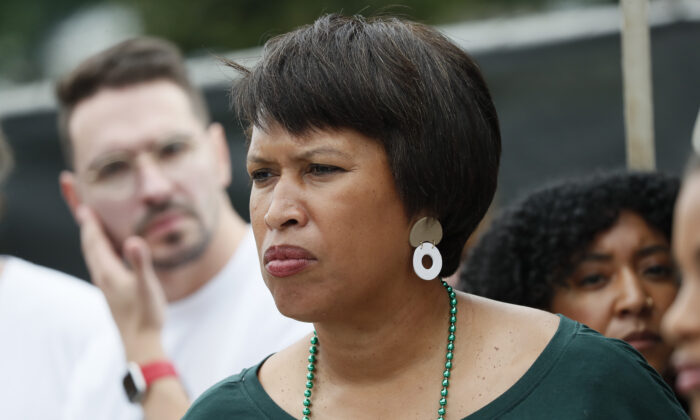 Washington Mayor Muriel Bowser attends March for Our Lives 2022 in Washington on June 11, 2022. (Paul Morigi/Getty Images for March For Our Lives)
US News

The mayor of the city of Washington has declared a public emergency over the influx of illegal immigrants into the nation’s capital.

Mayor Muriel Bowser announced the emergency on Sept. 8. The city has received some 9,400 illegal aliens from the states of Texas and Arizona, according to her office.

“Our response involves how can we live up to our values and make sure we have a humane, efficient process to deal with a crisis not of our making,” Bowser, a Democrat, told reporters during a briefing.

The declaration enables the mayor to establish a new office, the Office of Migrant Services, specifically to help the illegal immigrants arriving from the border states.

The office will receive an initial $10 million to establish the office, which will help nonprofits and others greet, house, and feed the illegal aliens. The city hopes to either use federal funding or be reimbursed for the spending.

The system overseen by the office will be separate from the city’s homeless response.

A new system is necessary “so that our homeless services system can continue to function in support of DC residents and so that we can properly respond to the ongoing humanitarian crisis and provide a humane assistance to migrants,” Bowser’s office said in a slide shown at the briefing.

Ranae Eze, press secretary for Texas Gov. Greg Abbott, told The Epoch Times in an email that Bowser is a hypocrite.

“In a city with a population over 700,000, she’s claiming an emergency for just over 7,900 migrants being bused into her sanctuary city,” Eze wrote. “That’s barely 1 percent of the population of Washington, D.C. The true emergency is on our nation’s southern border—not in our nation’s capital—where small Texas border towns are overrun and overwhelmed by hundreds of migrants every single day as the Biden Administration dumps them in their communities.

“Instead of fearmongering and complaining about a few thousand migrants in her sanctuary city, Mayor Bowser should call on President Biden to do his job and secure the border—something the President continues failing to do. Governor Abbott’s invitation is still open for Mayor Bowser to visit the border and see the actual crisis firsthand.”

Texas and Arizona have been busing thousands of illegal aliens who were released by U.S. authorities to Washington since the spring. Approximately 9,400 illegal immigrants have been bused to the nation’s capital since then.

Most of them move on to other destinations, according to Washington officials. Many of the immigrants are being housed in shelters and hotel rooms.

The Republican governors of Texas and Arizona, Abbott and Doug Ducey, respectively, say the busing will continue indefinitely. They have said they are trying to trigger a stronger response to border enforcement from President Joe Biden.

The mayor has repeatedly criticized the governors.

Bowser has twice asked the Department of Defense for National Guard assistance but has been denied both times.

She said conversations with the Biden administration are ongoing.