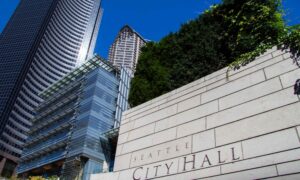 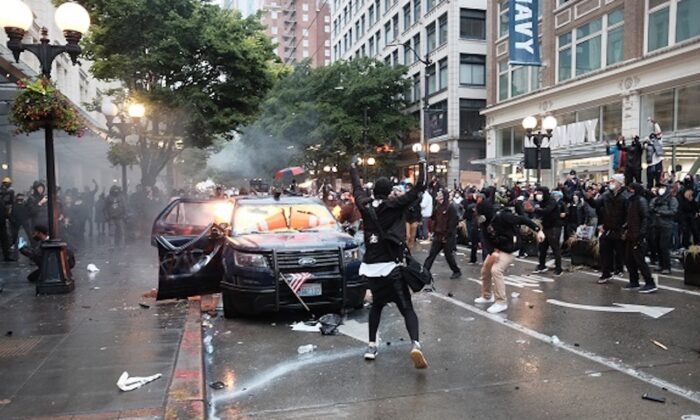 Kelly Thomas Jackson, 20, throwing a Molotov cocktail at a vehicle during a violent protest in downtown Seattle, Washington, on May 30, 2020. (U.S. District Court for the Western District of Washington at Seattle)
Crime and Incidents

A Washington man on Monday was sentenced to more than three years in prison for tossing Molotov cocktails at police during a summer protest that turned violent in downtown Seattle.

Kelly Thomas Jackson, a 21-year-old man from Edmonds, was arrested in September and pleaded guilty to two counts of unlawfully possessing destructive devices on Jan. 6, according to a statement by the Department of Justice.

He was handed a prison sentence of 40 months and three years of supervised release on Monday in the Seattle District Court for his activities during the May 30, 2020 protest, Acting Attorney Tessa Gorman announced.

Jackson was seen in various videos wearing “distinctive clothing” and carrying a glass container filled with flammable material and a wick. He was identified by authorities following an anonymous tip and a photo to law enforcement officers.

“Law enforcement obtained videos … show Jackson traveling into Seattle with at least one of the glass bottles with a wick,” records filed in the case state. “Other videos show Jackson throwing one Molotov cocktail into a police vehicle, then hiding himself in the crowd and jumping up and down with excitement after his crime.”

In another video obtained by authorities, Jackson was seen throwing another Molotov cocktail at the windshield of a police vehicle. The second device bounced off the police vehicle and exploded in flames outside a Nordstrom store.

“Unlike the vast majority of demonstrators who came to downtown Seattle to protest peacefully against systemic racism, this defendant came armed with Molotov cocktails—intent on dangerous destruction,” Gorman said.

“The danger to others is captured in pictures from the scene: flames from the burning cars and burning gasoline spread across the sidewalk, pollutant-filled smoke billowing into the crowd. This isn’t free speech—it is criminal conduct deserving of a federal prison sentence.”

Jackson’s case was investigated by the FBI and the Bureau of Alcohol, Tobacco, Firearms, and Explosives with assistance from the Seattle, Edmonds, and Mountlake Terrace police departments.

Seattle Special Agent Jonathan T. McPherson said the suspect had planned the criminal acts before going to the protest and had no intent to “peacefully protest.”

“We respect everyone’s right to free speech, but free speech does not come in the form of a Molotov cocktail,” McPherson said. “His premeditated actions and complete disregard for the safety of those around him warrant this sentence.”