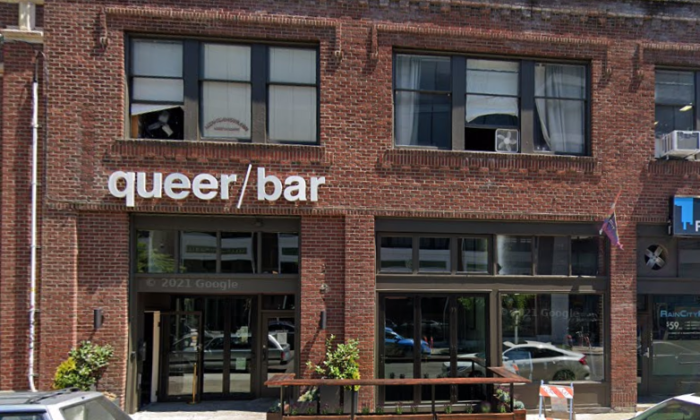 Queer/Bar, a nightclub and event venue in Seattle, was the site of an arson fire and hate crime on Feb. 24, 2020. (Google Maps)
Crime and Incidents

A 25-year-old man has pleaded guilty to committing a hate crime after setting a fire outside a Seattle nightclub called Queer/Bar, according to the Department of Justice (DOJ).

Kalvinn Garcia of Sedro Woolley, Washington, set fire to the contents of a dumpster in the alley directly behind the club on Feb. 24, 2020, based on documents filed in connection with the plea. He faces a maximum sentence of 10 years in prison and a $250,000 fine.

“The defendant targeted the patrons inside Queer/Bar, a known safe space for the LGBTQI+ community,” said Assistant Attorney General Kristen Clarke of the Justice Department’s Civil Rights Division in a May 26 press release.

“Hate crimes have no place in our society today and we stand ready to use our federal civil rights laws to hold perpetrators accountable,” Clarke said. “All people deserve to feel safe and secure living in their communities, regardless of their sexual orientation or gender identity.”

Garcia told law enforcement that he targeted the club when he got angry seeing the word “queer.” He also told officers, “I think it’s wrong that we have a bunch of queers in our society.”

According to the DOJ report, a few weeks after the incident, Garcia told a stranger that his intention was to trap and hurt the people inside the premises.

Garcia’s hatred for the community led him to harm people he did not even know, said Nick Brown, U.S. Attorney for the Western District of Washington. Brown added that such actions “will not be tolerated.”

The blaze was set at 9 p.m. in a large recycling bin next to the building. The fire crept up the side of the building where club patrons were sitting on the first floor, and at least 50 people were attending an event on the second floor.

The incident resulted in cancellations of events for several days, but there have been no reported injuries.

Officers from the Seattle Police Department were dispatched and apprehended Garcia in the 1400 block of Broadway following a short chase.

“Fortunately, our partners at the Seattle Police Department were able to respond quickly to this arson. This case shows our commitment to investigating civil rights violations with our partners.”

Garcia is scheduled to be sentenced Sep. 20, 2022. He was initially charged in King County Superior Court but was released during the COVID-19 lockdowns and restrictions.