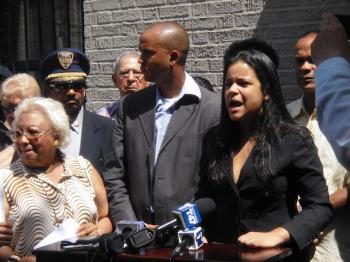 Annie Wu
Annie Wu joined the full-time staff at the Epoch Times in July 2014. That year, she won a first-place award from the New York Press Association for best spot news coverage. She is a graduate of Barnard College and the Columbia University Graduate School of Journalism.
View profile
Follow
biggersmaller
Print
NEW YORK—A large crowd of Washington Heights residents and community leaders gathered in front of District 10 Councilman Ydanis Rodriguez’s office Tuesday to voice support for their representative as he prepares to testify before a hearing this Wednesday regarding allegations that he aggressively, but not sexually, “touched” a female City Council staffer.

Details of the incident were uncovered when Rodriguez’s lawyer, Leo Glickman, filed an injunction on July 26 to make Wednesday's hearing public. According to the document, Rodriguez was accused of poking the City Council staffer in between the throat and the upper chest area. This reportedly happened after the councilman questioned her about the elimination of $250,000 in budget items for Puerto Rican and Dominican groups, reported the New York Daily News. After the alleged incident, the staffer filed a complaint with the Council’s Standards and Ethics Committee.

He went on to explain that the committee had told him to keep the allegations confidential “to maintain the integrity of the inquiry,” but the news was nonetheless leaked to the media shortly thereafter.

Washington Heights residents and community leaders from groups, such as the Community League of the Heights (CLOTH), the Northern Manhattan Improvement Corporation, and the Saint Spyridon Church Seniors, rallied in support of Rodriguez Tuesday, calling for a “public and transparent” hearing and “to invite public testimony, and to investigate the source of the leak to the press of what was supposed to be a confidential investigation,” according to a statement from Rodriguez’s office.

Manny de los Santos, a district leader for Northern Manhattan, said that Rodriguez has been fighting for District 10 daily at City Hall “to make sure the community is not neglected.” During challenging times like this, when Washington Heights is suffering from a budget deficit and their councilman is facing allegations, the community should unite in solidarity, he noted.

“I feel that we are under attack,” said Aneiry Batista, another district leader for Northern Manhattan, adding that gestures are frequently made while speaking in Latino culture, but they are not to be taken offensively.

Batista, along with many of the leaders and residents who spoke at the gathering, personally know Rodriguez and are close friends with the councilman. She said that Rodriguez has helped her to become the person she is today and that she does not believe he would physically assault anyone.

Yvonne Stennett, executive director of CLOTH, a local community development organization, said that Rodriguez needed to be aggressive in his words to fight for his community. Washington Heights has often suffered from budget cuts at City Hall, and Rodriguez has fought to bring back what the community needs, she noted. The gestures were likely taken out of context and the allegations are “nonsense,” she said, adding that “we as a community will not stand by it.”

Señora Maria from the senior center at Saint Spyridon Church said that she had fought for the center for many years without success, but Rodriguez listened to her.

“We will be with him till the very last minute,” she said.

Mireya, another supporter who has close ties with the councilman and believes in his innocence, noted that Rodriguez has helped the young and the elderly in the community by creating day care programs and arts programs in schools.

“I would trust him with my life … I know his roots. I know his family. He had a good upbringing,” she said.

The hearing is scheduled for 8:30 a.m. on Wednesday.