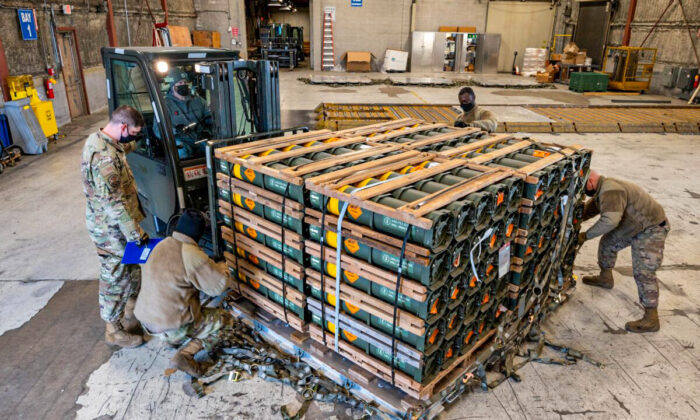 Airmen and civilians from the 436th Aerial Port Squadron palletize ammunition, weapons and other equipment bound for Ukraine during a foreign military sales mission at Dover Air Force Base, in Delaware, on Jan. 21, 2022. (U.S. Air Force/Mauricio Campino/Handout via Reuters)
Russia-Ukraine War

The Biden administration has dismissed reports of U.S. Javelin missiles that were sent to Ukraine being sold online to third parties, calling it Russian propaganda.

Reports of the sale first circulated on social media. One Twitter account posted a screenshot of a website on the dark web listing Javelin FGM-148 missiles for sale at $30,000 each. The missile is designed to be used against heavily armored vehicles such as main battle tanks and lighter-skinned military vehicles, and can also be used against bunkers and helicopters.

According to the AZ Osint tweet on June 2, the missile was sold by Ukrainians, suggesting that weapons have been diverted from official destinations. The U.S. State Department insists that such claims of weapons sales are false.

“Given Russia’s active and well-known use of disinformation, in accordance with its well-worn playbook, the authenticity of such images cannot be taken at face value and should be viewed with skepticism,” a State Department spokesperson told Fox News.

“The Russian government is heavily invested in producing disinformation to distract the international community from the Kremlin’s unprovoked and brutal invasion of Ukraine.”

The department “consistently monitors” any report of alleged diversion of U.S.-origin defense equipment anywhere in the world and takes all such allegations “seriously.”

The spokesperson added that U.S. officials will work with Ukrainian counterparts to make sure all weapons and funds delivered by the United States are “properly used and safeguarded.”

A National Security Council spokesperson also refuted reports of Javelin sales on the dark web, stating that the sources cited don’t “appear credible.” Moscow has a history of spreading disinformation about weapons proliferation from Ukraine, the spokesperson added.

The claim of Javelin sales on the dark web comes as the United States is sending another $700 million worth of military aid in its latest package to Ukraine. On June 1, the Defense Department detailed the weapons that will be sent as part of the package.

With the $700 million package, the Biden administration has spent $4.6 billion on Ukraine since the Russian military crossed its borders in late February. Since 2014, when Russia annexed the Crimean Peninsula, the United States has sent more than $7.3 billion in security assistance to Ukraine.

When asked by reporters about how Russia plans to respond to such American actions, Peskov insisted that it’s better they “not talk about worst-case scenarios.”