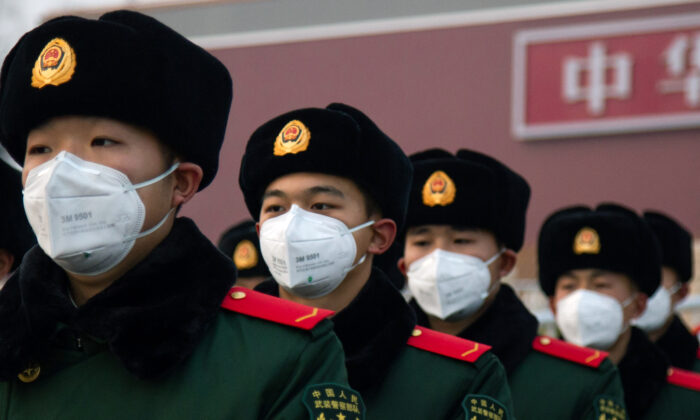 Washington Clings to the Idea the Novel Coronavirus Came From Nature

The State Department, NIH and CDC know far more than they are telling

Washington is hanging onto the idea that the coronavirus was a zoonotic disease—that is, a disease that was carried by animals and infected humans.

The U.S. coronavirus czar, Dr. Anthony Fauci, and the Center for Disease Control and the National Institute of Health have been supporting this thesis, which is also backed by the WHO and, of course, by Chinese officials. Most of the world’s scientists have gone along with the idea that the coronavirus comes from nature.

The most common theory is that the coronavirus pandemic originates from horseshoe bats that infected an unknown intermediate host and then the killer virus was passed on to humans.

The horseshoe bat does not exist in Wuhan, the place where the infection got started in humans, although horseshoe bats have been collected and used in studies carried out at the Wuhan Institute of Virology, China’s only Level 4 bio-safety laboratory, and also at the Wuhan Center for Disease Control and Prevention which is about 600 meters from the Wuhan wet market and adjacent to the city’s Union Hospital, where early cases were treated.

It was the Wuhan Center for Disease Control and Prevention that first detected a novel coronavirus in two hospital patients with atypical pneumonia and whose director called Shi Zhengli at the Wuhan Institute of Virology and asked her for help. Exactly why the Director would call Dr. Shi Zhengli and not other scientists at the Wuhan Laboratory has not been explained. Did the Wuhan Center know that the disease came from horseshoe bats?

The virus carried by the horseshoe bat is only about 86 percent to 92 percent similar to the human-infecting novel coronavirus, also known as SARS-COV-2, which causes the disease called COVID-19.

A controversial French scientist, Dr. Luc Montagnier, who discovered that the AIDS epidemic was caused by HIV (human immunodeficiency virus) and was awarded a Nobel prize (and who works today in China at the Shanghai Jiao Tong University), says that there are “HIV RNA fragments” found in the coronavirus genome.

And in Russia, Veronika Skvortsova, head of Russia’s Federal Medical-Biological Agency (FMBA) and ex-health minister, was asked if the pandemic virus could be artificial. She said: “We can see that a fairly large number of fragments distinguishes this virus from its very close relative, SARS.”

Montagnier claims that the coronavirus is man-made and could not occur in nature. In his opinion, the Wuhan Virology Laboratory “tried to use one of these [coronaviruses] as a vector for HIV in the search for an AIDS vaccine.”

If Montagnier’s claim has any validity, then there would have to be strong evidence that the Wuhan Laboratory was seeking an AIDS vaccine and using the coronavirus as part of the research effort.

It should be noted that research into an AIDS vaccine has very significant commercial importance. In 2018 alone, some 1.7 million new HIV infections were reported. Today there are more than 37 million people known to be living with AIDS. In 2018 alone, 770,000 people died from AIDS, which included around 100,000 children.

If you believe the numbers reported, China accounts for 3 percent of new HIV infections globally each year. In 2018, China reported a 14 percent rise in new infections, with 40,000 in the second quarter alone.

According to research done by Yaakov Applebaum, Jiang Mianheng, the son of Jiang Zemin (the former leader of the Chinese Communist Party), is the man directly responsible for the construction of China’s Biosafety Level 4 Laboratory, the Wuhan Institute of Virology. His son, Jiang Zhicheng has a controlling interest in Wuxi AppTec which in turn controls Fosun Pharma.

On Jan. 21, 2020 the Wuhan Institute of Virology applied for a Chinese patent for the drug Remdesivir which is currently being tested in Chicago as a promising treatment for coronavirus. In a press release under the title “Chinese scholars have made important progress in screening anti-2019 new coronavirus drugs” the press release says that the drug Remdesivir has “not been listed in China and has intellectual property barriers [and thus] we applied for a Chinese invention patent … from the perspective of national interests in accordance with international practice.”

In short, China reverse engineered a product that was developed and patented in the United States by Gilead Sciences, based in Foster City, Calif. Plans to manufacture Remdesivir in China are not known, nor is the role of Fosun Pharma in any planned production, although Fosun does manufacture pharmaceuticals including flu vaccines.

Take note that if the virus was discovered in December, exploitation of Remdesivir was done very quickly. Or did China tap into the computers of Gilead Sciences?

If Montagnier is right that there are fragments of HIV in coronaviruses, then the question arises whether the Wuhan Institute and other laboratories were working on HIV vaccines using coronaviruses.

The short answer is that significant work was going on at Wuhan and other research centers, especially Shanghai. In June 2014 five Chinese scientists published a review article entitled “Receptor Binding Domain Based HIV Vaccines.” The scientists were Huan Liu from the Wuhan Institute of Virology and Wenwen Bi, Qian Wang, Lu Lu and Shibo Jiang of the Key Lab of Molecular Virology of the Shanghai Medical college. (Shibo Jiang also is associated with the Kimball Research Institute of the New York Blood Center.)

The study reviewed numerous efforts to find a pathway to an AIDS vaccine. The authors note that “In previous studies, we have attempted to use the receptor binding site (RBD) of the virus such as MERS-CoV and avian influenza A virus models as an antigen for vaccine design. In practice this strategy has achieved very good results.” MERS is the Middle East Respiratory Syndrome (MERS), which is a viral respiratory illness that is new to humans, first identified in 2012. MERS is a type of coronavirus.

In 2015 a number of scientists including the now world-famous “bat lady” scientist Shi Zhengli (listed in the article as Zhengli-LiShi) published a paper called “A SARS-like cluster of circulating bat coronaviruses show potential for human emergence.” The study included American researchers associated with the University of North Carolina Department of Cell Biology and probably is related to work that was funded by the U.S. government. (That research was suspended on the grounds it was highly dangerous in 2014, but resumed in 2017.)

The paper is focused on the SARS-like virus SHCO14-CoV, “which is currently circulating in (the) Chinese horseshoe bat populations.” Shi Zhengli became famous for going to places where these bats live, capturing them and bringing them back to the virology lab. The researchers say, “Using the SARS-CoV reverse genetics system, we generated and characterized a chimeric virus expressing the spike of bat coronoavirus SHCO14 in a mouse-adapted SARS-CoV backbone.”

A chimeric virus is defined as “new hybrid microorganism created by joining nucleic acid fragments from two or more different microorganisms in which each of at least two of the fragments contain essential genes necessary for replication.”

What this means is that the research group was able to take the bat virus and make it potentially capable of infecting humans, or as they say “we built a chimeric virus encoding a novel zoonotic CoV spike protein … that was isolated from Chinese horseshoe bats—in the context of the SARS-CoV mouse-adapted backbone.”

It is not clear what the purpose of this research was, but it certainly demonstrated that a coronavirus can be modified in a way that the infection could emerge in humans.

In 2018, as is now understood, the United States was concerned about conditions in the Wuhan Virology Laboratory and the U.S. Embassy in Beijing dispatched a team on two occasions to visit the laboratory and meet with scientists there, including Dr. Shi Zhengli.

The report pointed out serious deficiencies in the lab and warned about potential threats posed by coronaviruses in bats. Presumably the Embassy knew much more about Wuhan’s bat research than has been revealed so far, and were greatly concerned about the danger it raised.

Unfortunately, the State Department has not released the reporting cables sent back to the United States nor the cables that prompted the investigations. Moreover, the fact that the State Department experts were sent back to the lab a second time suggests they were instructed to go back and ask more questions about what the Chinese scientists were doing with horseshoe bats.

Clearly the U.S. government was alarmed—in fact the CDC had closed down some labs in the United States fearing the release of virus infections.

Given the Chinese research record, warnings about the conditions in the Wuhan Virology Laboratory, previously recorded research involving modifying SARS (corona) viruses, and research with coronaviruses and HIV, it is difficult to understand why Washington is sticking with the natural bats to humans explanation for the current coronavirus plague. Washington knows better.

Pretending the coronavirus pandemic is something natural is intentionally misleading the American people, and people around the world infected by the coronavirus.

At minimum, the CDC and NIH as well as the State Department should tell us what they really know. An independent investigation is needed with full access to all records.

Stephen Bryen, Ph.D., is regarded as a thought leader on technology security policy, twice being awarded the Defense Department’s highest civilian honor, the Distinguished Public Service Medal. His most recent book is “Technology Security and National Power: Winners and Losers.”