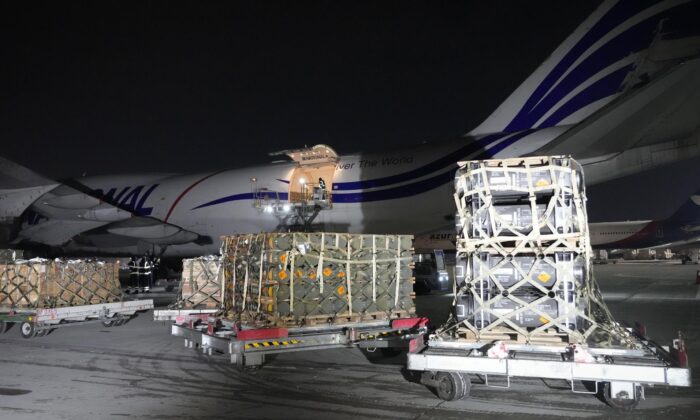 Workers unload a shipment of military aid delivered as part of the United States of America's security assistance to Ukraine, at the Boryspil airport, outside Kyiv, Ukraine, on Jan. 25, 2022. (Efrem Lukatsky/file/AP Photo)
US News

The Biden administration has authorized an additional $100 million in military aid to Ukraine to help the embattled country fight against the ongoing invasion by Russian forces.

“Today, May 19, the Department of Defense (DoD) announces the authorization of a Presidential Drawdown of security assistance valued at up to an additional $100 million. This authorization is the tenth drawdown of equipment from DoD inventories for Ukraine since August 2021,” Pentagon Press Secretary John F. Kirby said in a May 19 press release.

So far, the United States has committed around $4.6 billion in security assistance since the beginning of the Biden administration. Out of the $4.6 billion, $3.9 billion has been disbursed since Russia’s Ukraine invasion on Feb. 24.

Since 2014, the United States has given over $6.6 billion in security assistance to the European nation.

The newly announced munitions will be supplied to Ukrainian military forces in the eastern regions. According to Kirby, the items will “start to flow very, very soon.”

“I cannot give you an exact date of when it’s all going to show up in Ukraine, but you can imagine having seen us do this in the past that we’re not going to sit on our hands. We’ll start flowing that stuff immediately,” Kirby said, according to a Defense Department news update.

The $100 million dollars military assistance follows the House approving a $40 billion aid package for Ukraine on May 10. The bill will not only provide Kyiv with military assistance but also economic aid and assist regional allies. It will aid in replenishing weapons the Pentagon had shipped earlier.

With the bill, the total American support for Ukraine comes to $54 billion, which includes the $13.6 billion that Congress had approved in March.

Announcing the approval of the new $100 million military aid, Secretary of State Antony Blinken stated that “the United States is committed to helping Ukraine continue to meet its defense needs and build its future capabilities, as well as to bolster Allies and partners across NATO’s Eastern Flank and the broader region,” according to a May 19 press release.

The European Union has approved 2 billion euros ($2.11 billion) of financial support to Ukraine. Of this, 500 million euros ($527 million) in funds were announced last week and will be used to buy heavy weapons.