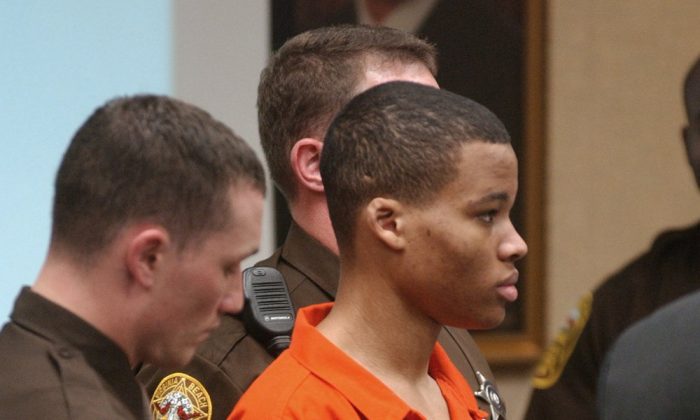 WASHINGTON—The Supreme Court on March 19 agreed to consider Virginia’s plea to reinstate the life-without-parole sentence of a man who as a teenager participated in sniper shootings that terrorized the Washington region in 2002.

The justices said they will take up the state’s appeal in the case of Lee Boyd Malvo, who was 17 when he and John Allen Muhammad fatally shot 10 people in Maryland, Virginia, and Washington. Malvo was sentenced to life-without-parole terms in Virginia and in Maryland. Muhammad, who was 41 at the time of the shootings, was sentenced to death and was executed in 2009.

Malvo was sentenced to four life terms for crimes he committed in Virginia. But the U.S. Court of Appeals for the 4th Circuit ruled last year that while Malvo’s life-without-parole sentences were legal when they were imposed, Supreme Court decisions that followed altered sentencing requirements for juvenile offenders.

The appeals court judges said a resentencing would determine whether Malvo qualifies as “one of the rare juvenile offenders” who can be sentenced to life without the possibility of parole because his “crimes reflect permanent incorrigibility.” They said if his crimes instead “reflect the transient immaturity of youth,” he is entitled to a sentence short of life without parole.

The Supreme Court will review that decision. As is typical, the justices did not make any comment in agreeing to hear the case, which will be argued in the fall.

Regardless of what the Supreme Court decides, it is unlikely that Malvo would get out of prison anytime soon. He isn’t currently getting a new sentencing hearing in Maryland, where he struck a plea deal and was sentenced to six life-without-parole prison terms for shootings that took place in that state.

A judge previously ruled that Malvo would not get new sentencing hearings in Maryland. Malvo, who has been serving his sentences at Red Onion State Prison in Pound, Virginia, has appealed.

For people in the Washington area, the shooting spree is remembered as particularly frightening because of the randomness of the attacks. Over three weeks, Muhammad and Malvo shot people as they went about everyday activities.

An FBI analyst was killed as she stood in the parking lot of a Home Depot. A bus driver was fatally shot on his bus as he readied for his route. Two victims were fatally shot at gas stations. Many people were fearful every time they went outdoors. Among those injured was a teenager wounded after being shot outside his school. Schools canceled outdoor activities from recess to sporting events.

Virginia’s appeal was among four criminal cases the court added to its docket for the term that begins in October. In the others:

Kansas, backed by the Trump administration and 10 other states, wants to be able to prosecute immigrants for identity theft and other crimes when they use other people’s Social Security numbers to work in the United States. Kansas’ top court ruled that the state couldn’t prosecute the immigrants because the case relied on information that is on a required federal work authorization form, the I-9—information that immigration law says may only be used for enforcement of federal crimes.

The justices will decide whether convictions by non-unanimous juries in criminal cases violate the Constitution. Louisiana and Oregon are the only states that allow divided juries on some criminal charges, although Louisiana voters recently amended the state constitution to prohibit non-unanimous verdicts for crimes committed after Jan. 1.

The court has held that the Sixth Amendment requires unanimous verdicts in federal criminal cases. But unlike with most rights guaranteed by the first 10 amendments, states have not been compelled to follow suit and require unanimous juries in all state cases.

A Kansas death row inmate is challenging whether states can eliminate the so-called insanity defense for criminal defendants without violating the Constitution. The inmate has been sentenced to death for killing his estranged wife, their two daughters and the wife’s grandmother, but the jury was not allowed to consider evidence that he was criminally insane at the time of the killings.