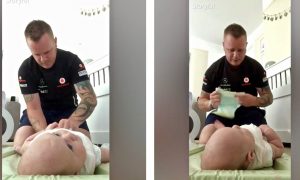 The look of pure bliss covers this baby girls face as she gets her hair washed for the first time. Twenty-year-old Taveon Glenn catches this beautiful moment on camera. The name of this cutie is Amira Yvonne, his daughter. A nurse carefully washes baby Amira’s hair at Miami Valley Hospital. This clip from Ohio took the internet by storm, melting hearts around the world.

Glenn and his fiancée, Sierra, welcomed Amira into the world in November and he just could not help himself.  He filmed this precious moment as his first kiddo experienced her first bath.

Next, the nurse gently scrubs her scalp with the brush and using delicate circular motions. When the nurse lifts the bowl to rinse out the shampoo, this adorable little girl falls into complete bliss. She enjoyed every second of getting clean, not upset about one thing. This is the part where viewers tend to get an itch of baby fever.

Amira, which is Hebrew for “princess”, became an internet sensation after only being on born two days prior. Taveon and his fiancé Sierra were both taken by surprise when they came to realize their baby girl was a star. Taveon filmed this moment because it was one to share with family and friends. Or at least that’s what he thought.

The second clip shows a father massaging a newborn’s head as he washes it. The baby seems to really enjoy the massage. Looking up at her father and reaping the benefits of his love is a satisfying moment for the little one and the viewers. This video shows how absolutely in love he is with this bundle of joy.

We are lucky that these moments were captured. An ever-present reminder of pure love and bliss.