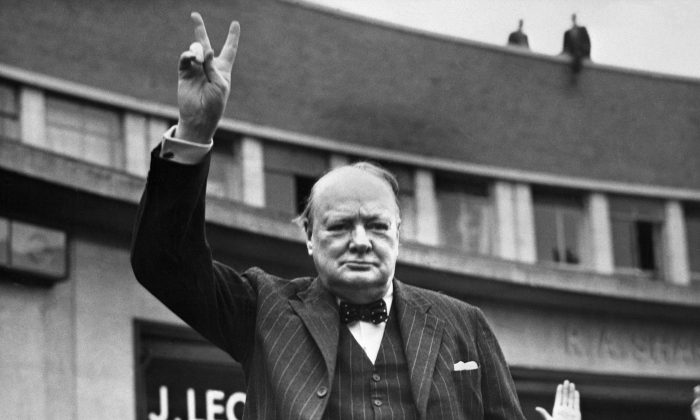 Was Winston Churchill a Racist?

LONDON—I cannot adequately describe the onslaught of fury I provoked when, earlier this year, I happened to say to a British media studies teacher that we would not be here had it not been for British Prime Minister Winston Churchill.

That evening, I had attended a documentary directed by Ai Wei Wei at the British Academy of Film and Television Arts. Following the screening, my table filled up with the students of this media studies teacher (let’s call him Jai).

Everything was going smoothly as we discussed the topic of artistic freedom and democracy. Then I said this year’s acclaimed “Darkest Hour” movie starring Gary Oldman as Churchill had made me realize that the indomitable wartime leader had saved Britain, Europe, and the world from a murderous “Thousand-Year Nazi Reich.”

Jai launched into a loud tirade at me, asserting that his Bengali parents would teach me a thing or two about “racist” Churchill. He added that Franklin D. Roosevelt, the wartime president of the United States, and Churchill were “the two worst racists to inhabit this planet for the past 500 years.”

I have to admit that, until that moment, I had never before heard this theory. Perhaps I live in a bubble, but my life experience includes the belief that World War II would have ended with the ascent of the Reich and the Japanese Empire. Indeed, by 1943, the German architect of the “Final Solution,” Adolf Eichmann, had a blueprint for every last Jew living on planet earth—a total of 14 million—all destined for extermination. Needless to say, millions of others would have also been taken into slave labor or executed.

Jai got angrier and angrier at me as I challenged his views on Churchill. He told me that the British leader had been responsible for far more starvation and “genocide” than any leader. Though I heatedly reminded him that 20 million Russians had perished in the war perpetrated by Hitler, he suggested I obviously venerated “the world’s worst racist of the recent past.”

His students gazed at him adoringly, smiling and nodding as he reminded them that no person of color could have anything but contempt for Churchill. In turn, I told them that the free world was blessed with the gift of FDR and Churchill; had it not been for these two brilliant leaders, the world would have descended into a dark age of unthinkable carnage.

This movement to discredit Churchill came to a head in October when retired U.S. astronaut Scott Kelly quoted Churchill in a tweet and soon was bombarded by a tsunami of hatred. One Twitter user said, “With all due respect Winston Churchill is just as good as Hitler.” Kelly then apologized and said he would do research on the British leader’s malfeasance.

Yes, it is true that in October 1942, a catastrophic typhoon hit India, and by May 1943, in what is today lower Bangladesh, the rice crop was decimated. At the same moment, Japan had overrun Burma, the main supplier of India’s rice imports. India, still part of the British Empire, was in internal political turmoil, and the catastrophe that followed is blamed by some on Churchill, who had ordered rice supplies for Britain to continue. His administration had also suppressed the Quit India movement because Japan was on India’s doorstep, ready to invade.

At his very worst, historians report that he infuriated Secretary of State for India Leo Amery with his intransigence on the unfolding humanitarian crisis.

The International Churchill Society writes, “Like most Englishmen of his generation, Churchill held views on Indians and other non-whites that are far from our thinking today,” but added, “Bengal’s Muslim majority ministry did nothing, while many of its Hindu members were making huge profits trading in rice. … The magnitude of what was happening did not reach the attention of London and Churchill until it was too late.”

Over the past decade, statues of Churchill often have been vandalized, most notably in his parliamentary constituency of Woodford Green and in London’s Parliament Square. Earlier this year, a new cafe Blighty UK in Finsbury Park, London, was forced by anti-Churchill protesters to remove their large mural of the wartime leader. Vandals repeatedly marched in and scrawled “SCUM” and “IMPERIALIST” on the mural, and the proprietors finally caved in and took it down. Interestingly enough, the siege of the cafe resulted in Britons from far and wide arriving to support the enterprise, but sadly the owners could not risk restoring the image of Churchill.

This year, British author Afua Hirsch, whose mother is Ghanaian and father of Jewish descent, got into a heated discussion with television host Piers Morgan about the racism of the nation’s past. Considering that 10,000 Jewish children were taken in by wartime British families in the “Kindertransport,” I find this a sad spin. It should be noted that in 1920, Churchill wrote of the Jews, “No thoughtful man can doubt the fact that they are beyond all question the most formidable and the most remarkable race which has ever appeared in the world.”

On another TV show, Kehinde Andrews, a black studies professor at Birmingham City University, condemned Churchill and labeled Britain a nation “built on racism.” I must say I find these accusations laughable, as in the 24-hour cycle on British radio and television—to this nation’s credit—shows are often hosted by a majority of journalists of color, from sports to weather to finance to news reports.

As readers of The Epoch Times will know, my favorite quote comes from Shakespeare’s “Julius Caesar.” I will apply it here to Winston Churchill: “The evil that men do lives after them; the good is oft interred with their bones.”

I, a “non-Aryan,” am alive because of him, and for me, that makes him enough of a hero for all eternity.