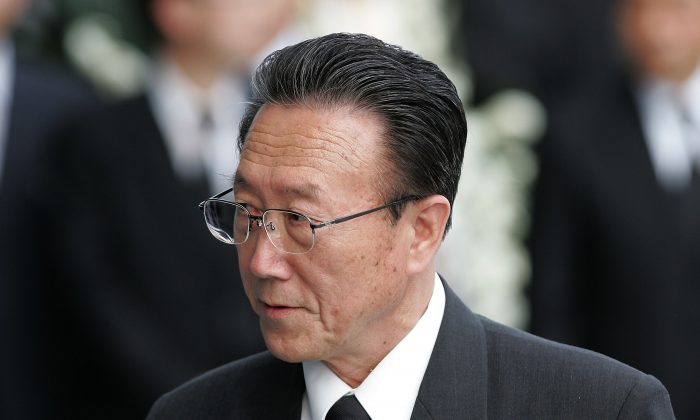 North Korea announced Wednesday that its most senior official in charge of inter-Korean relations died in a car accident.

Kim Yang-gon was head of the United Front Department of the ruling Korea Workers’ Party, a member of the North Korean Central Committee and alternate member of the Politburo. He had most recently negotiated with senior South Korean officials in August to defuse a crisis caused by a North Korean incursion into the demilitarized zone and exchange of artillery fire.

Kim Yang-gon’s demise raises suspicions that he was killed by the regime, particularly since several other officials over the years have suffered a similar end. But prior to his death, there were no indications that Kim was distrusted or in danger of being purged.

In addition to the August 2015 negotiations, he had also participated in a senior delegation that made a surprise visit to South Korea in October 2014. He had recently escorted North Korean leader Kim Jong-un on inspection tours to military and civilian sites, suggesting that he remained a trusted aide.

His frequency of accompanying the leader had increased under Kim Jong-un’s reign as compared with the era of Kim Jong-il.

Kim Yang-gon’s death in a car accident might be interpreted as paying the ultimate price for the collapse of the inter-Korean mini-détente following the August agreement.

However, the official announcement of Kim’s death described him as Kim Jong-un’s “closest comrade-in-arms and steadfast revolutionary comrade” who had made “dedicated” efforts to achieve Korean unification.

The North Korean leader attended the funeral, expressing “bitter grief” and bemoaning the loss of his “his faithful helper whom nobody can replace,” suggesting an accidental rather than planned death. That said, other North Korean elites may now be more wary of getting into their cars.

Suggestions by some pundits that Kim’s death will hinder inter-Korean dialogue are a red herring, since Pyongyang had already spiked Seoul’s latest attempts at engaging the regime. While the August agreement had led to more reunions of Korean families separated since the Korean War, subsequent senior-level dialogue collapsed in early December over the inability to reach consensus even on an agenda.

During those meetings, North Korean representatives insisted on discussing only the resumption of the Kumgangsan tourist venture, a special region in North Korea for South Korean tourists, which has been a cash cow for the regime.

It is unknown who will succeed Kim Yang-gon, and his replacement may not be announced until the convening of the 7th Congress of the Korea Workers’ Party in May 2016.

But North Korea has repeatedly demonstrated that it rejects implementing the political and economic reforms necessary to justify a principled South Korean engagement strategy. Nor will the regime moderate its aggressive foreign policy to refrain even from threats of nuclear incineration and highly insulting diatribes against President Park Geun-hye.

Bruce Klingner, a senior research fellow for Northeast Asia at The Heritage Foundation’s Asian Studies Center, spent 20 years in the intelligence community working at the CIA and Defense Intelligence Agency. Copyright The Daily Signal. This article was previously published on DailySignal.com.