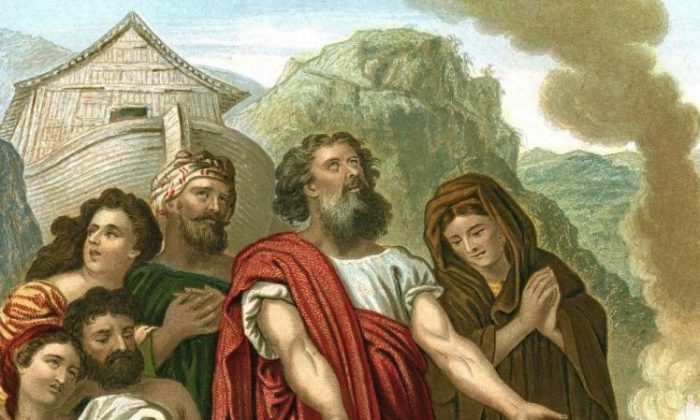 NOAH'S ARCHEOLOGY: The story of a Great Flood is present throughout many ancient cultures. But did it really happen? (photos.com)
Beyond Science

Noah’s Ark and the Great Flood, Did it Really Happen?

“In the six hundredth year of Noah’s life, in the second month, the seventeenth day of the month, the same day were all the fountains of the great deep broken up, and the windows of heaven were opened. And the rain was upon the earth forty days and forty nights.” —Genesis 7:11-12

Approximately 9,000 to 5,000 years ago in the northern Turkish province of Sinop, an event of spectacular historic magnitude took place. So spectacular, in fact, that some believe it represents proof that the “Great Flood” recounted in the Bible may have been an actual (though somewhat exaggerated) representation of real events.

In September of 2004, an expedition in the Black Sea by a team of scientists from various institutions (including the National Geographic Society) determined that the sea in question was not always as we know it today.

They concluded that it had originated from an immense lake of black water that at one point in history began to widen in an unusually rapid way. The change was so great, in fact, that inhabitants of the surrounding area were immediately obliged to search for more secure land, hastily leaving behind housing, tools, and other traces of their former lives.

This led the underwater expedition headed by oceanographer Robert Ballad to declare that there once existed human settlements that now reside more than 300 feet underwater. This startling Black Sea discovery not only contributed to a thoroughly enriched historical understanding of the serious alterations in water level suffered in the ancient Middle East, but also raised questions about what caused the alteration in the first place.

Since then, scientists and reporters continue to probe the unresolved issue; it is a key to understanding the historical development of human civilization and the different climatic stages that Earth has experienced. Furthermore, it is an important theme intertwined not only with the Judeo-Christian tradition but with many legends from different cultures around the world—the Great Flood.

The Black Sea: Proof of the Flood?

Contemporary hypotheses suggesting that the rapid growth of the Black Sea was a consequence of an incredible rainfall of planetary proportions has never received great sale. Based on a large framework of scientific laws, predominantly geological, which have been established on the basis of empirical observation over the years, makes this a rather improbable scenario.

In the first place, skeptical geologists propose that for such a flood to have occurred, we would find a similar stratum throughout the world covered with pebbles, sludge, boulders, and other elements. It is curious that this layer cannot be found, even more so when the flood narrated by the Bible had taken place in a time as recent as 3000 B.C.

Neither can be found the strata of fossils, with different animal and vegetable species occupying specific soil layers. According to flood logic, the animal remains of all species before the big flood (including the extinct dinosaurs) should be found today in only one stratum, without any distinction. But paleontology completely contradicts these suppositions.

Yet these examples appear to be only the tip of the iceberg comprising the arguments that refute a global flood. Even so, much of such reasoning is refuted with equal grace by the “pro-flood” scientists. In fact, descriptions like “all the sources of the great abyss were broken” or “the waterfalls of the heavens were opened” recounted in Genesis are backed up by hypotheses that, although incredible, are impossible to rule out as being incompatible with reality.

One of the more dramatic hypotheses proposed that the planet could have been covered with water up to its highest points, contrary to the calculations indicating that all the water suspended in the atmosphere would only be enough to reach a modest 1.2 inches over the total surface of Earth.

These “flood supporters” calculate that if the geography of Earth went through a leveling out in its surface—the mountains being lowered, the sea troughs being elevated—then the entire Earth would be covered by thousands of feet of water.

According to the water-covers-the-earth theory, in the times of Noah the upper layers of the atmosphere contained a substantial amount of water that today makes up the oceans. This atmospheric water was what covered the whole planet, and which later returned to the ocean troughs by violent vertical tectonic movements. Researchers in support of this idea believe it makes suitable reference to the “waterfalls of the heavens” that could condense themselves thanks to dust generated by several simultaneous volcanic eruptions.

With respect to non-Biblical myths about a purifying flood, these can be found in the Hindu, Sumerian, Greek, Acadia, Chinese, Mapuche, Mayan, Aztec, and Pascuanese (Easter Island) cultures, among others. Several of these stories appear to possess surprisingly similar common factors. Among the most repeated themes are those of celestial announcements ignored by the people, the great flood itself, the construction of an ark to preserve life from the flood, and the later restoration of life on the planet.

A clear example of this similarity is provided by pre-Biblical Mesopotamian history of the flood in which the god “Ea” warned Uta-na-pistim, king of Shuruppak, about the punishment that awaits humanity for its serious moral degeneration. Uta-na-pistim received instructions from the god to construct a craft in the form of a cube with eight floors, and said that it should include in it a pair of each species of animal, plant seeds, as well as his own family. Thus, Uta-na-pistim survived the several-day-long deluge, released a bird to verify the proximity of dry land, and made an animal sacrifice to the gods.

In Search of the Lost Ark

One separate point that adds weight to the Bible controversy is the body of photographic and physical evidence of a large object encrusted in Mount Ararat, where, according to the Christian text narrations, finally rested the ark of Noah.

In the beginning of 2006, University of Richmond professor Porcher Taylor declared that according to an extensive study made over years of satellite photography there is a foreign object encrusted in the area northeast of the mountain, the length of which coincides perfectly with that of the ark recounted in the Bible.

Such satellite images from above Ararat have inspired the curiosity of a great number of scientists since this declaration was made in 1974. Several expeditions of investigators also managed to rescue remains of petrified wood, as well as 13 strong anchors of rock in the area surrounding the supposed location of the possible archeological treasure. Ultrasonic tests have also been made, revealing a very odd structure embedded in the rock.

In spite of the multiplicity of texts from diverse cultures which tell the story of a great ancient flood, the magnitude and duration of such an event seems to be a point of argument, even among those who believe that such an event actually occurred. Thus, while a small number of researchers suggests that this flood covered the entire Earth in vast amounts of water, most geologists agree that such a scenario is an impossibility.

While not everyone believes ancient accounts that describe the re-creation of humanity from the salvation of a handful of people, it would seem that a climatic catastrophe actually did take place across the entire planet several millennia ago. We can also safely assume that an indefinite number of human beings in elevated locations had the capacity to continue civilization, and to transmit the story of the occurrence to later generations.

Up until the time when evidence is revealed to definitively tip the scales toward one of these particular theories, the story of a time when a great flood purged the sins of man will be taken as a myth for some and a statement of historical fact for others. Either way, this great ancient flood remains forever a part of the story of humankind.