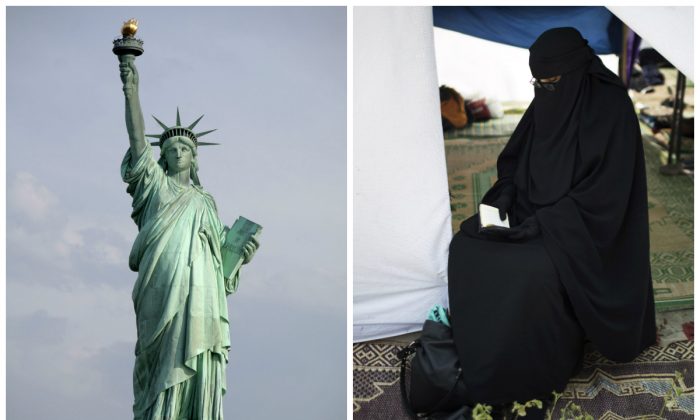 Was the Statue of Liberty Based on a Muslim Woman?

A debate over whether the Statue of Liberty was “born a Muslim woman” has been going on for the past couple of days, as some link the idea to the current refugee crisis.

According to the National Park Service, prior to designing it, he took a life-changing trip throughout Europe and the Middle East, where Bartholdi “discovered his passion for large-scale public monuments and colossal sculptures.”

“In 1869, the Egyptian government expressed interest in designing a lighthouse for the Suez Canal. Eager and excited, Bartholdi designed a colossal statue of a robed woman holding a torch, which he called Egypt (or Progress) Brings Light to Asia. When he attended the canal’s inauguration, however, Bartholdi was informed that he would not be able to proceed with the lighthouse,” the service added.

“Although disappointed, Bartholdi received a second chance to design a colossal statue. In 1865, Edouard de Laboulaye proposed that a monument representing freedom and democracy be created for the United States. Bartholdi was a great supporter of Laboulaye’s idea and in 1870 he began designing the Statue of ‘Liberty Enlightening the World.'”

The fact that Bartholdi wanted to, as author Barry Moreno wrote, put up the “veiled peasant woman” statue in Egypt before designing the Statue of Liberty has led some–including the Smithsonian–to claim that the statue “was born a Muslim.”

Author Edward Berenson wrote in The Statue of Liberty: A Transatlantic Story, that the Egypt design “a giant female fellah, or Arab peasant, and gradually evolved into a colossal goddess,” which “bore an uncanny likeness to what we know as the Statue of Liberty.”

But not everyone is on board with the interpretation. Conservative commentator Glenn Beck was among those that took issue with the claim.

Is the Statue of Liberty a Muslim lady?

Beck also said that the country’s national museum being so close to the Obama administration’s views on immigration is troubling.

“Can you imagine any other president that would change our history, change our traditions and start having our museums start to say — for his policies, ‘You know what, she was a Muslim woman. You should feel pretty guilty about not taking [in refugees],'” he said. “This is crazy.”