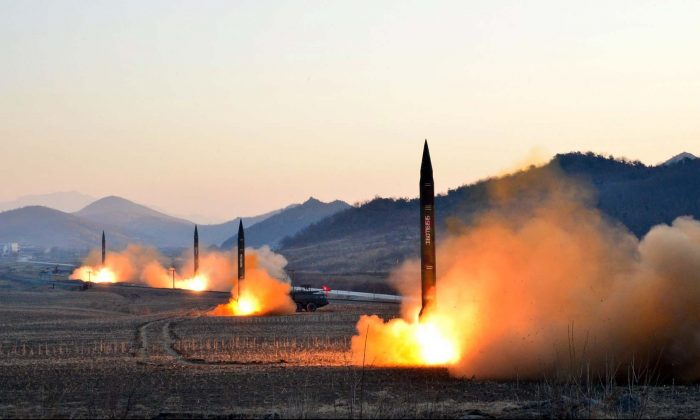 This undated picture released by North Korea's Korean Central News Agency (KCNA) via KNS on March 7, 2017 shows the launch of four ballistic missiles by the Korean People's Army (KPA) during a military drill at an undisclosed location in North Korea. (STR/AFP/Getty Images)
International

Was North Korea’s Missile Test Sabotaged by the US?

North Korea carried out yet another missile test on Tuesday—but it didn’t take off as planned, reportedly blowing up immediately after launching.

“A missile appears to have exploded within seconds of launch,” Commander Dave Benham, a spokesman for U.S. Pacific Command, told Reuters.

If Benham’s assessment is accurate, the missile failure would be consistent with a report earlier this month that elaborated on a secret “cyberwar” targeting North Korea’s controversial missile and weapons programs.

According to a New York Times report in early March, the United States’ efforts may be able to sabotage test launches within a few seconds, consistent with Benham’s statement.

A number of North Korean missile launches have failed, with rockets exploding, veering off course, or plunging into the sea. The country launched seven Musudan missiles last year—all but one of them failed. In October 2016, the U.S. military detected another failed missile launch.

U.S. and South Korean officials told Reuters that details of Tuesday’s failed test are unclear, including the missile type.

The Times report didn’t rule out the incompetence of North Korea’s missile-testing apparatus. However, experts say that North Korea has successfully tested missiles over the past year, including two nuclear tests in 2016, raising alarm in the Asia-Pacific region. The country is believed to be working to develop a nuclear weapon capable of reaching the United States.

Recently, North Korea launched a successful Musudan missile test, with the rocket falling in the sea near Japan, while declaring that if a single bullet is fired, a nuclear response would be warranted against the United States.

In the Times report, Obama “warned President Trump they were likely to be the most urgent problem he would confront,” adding that Kim Jong Un is aware of U.S. efforts to sabotage missile testing and had ordered an investigation into it. Kim also recently executed five senior security officials.

In 2015, it was reported that the U.S. launched a secret malware campaign targeting the North’s nuclear program—not unlike the Stuxnet virus program used against Iran’s nuclear systems. But unlike Stuxnet, the malware wasn’t able to compromise or breach North Korean systems.

Trump now has the option to increase the cyber-strikes on North Korea’s missile apparatus, and at the same time increase sanctions on the already heavily-sanctioned communist regime.

Last week, Secretary of State Rex Tillerson talked tough on the situation in North Korea while visiting Japan, South Korea, and China. Reports have indicated that sweeping sanctions are on the table, but Tillerson stated that the policy of “strategic patience” employed by the Obama administration is over. Now, all options—including a military one—will be considered, he said.

The medium-range Musudan missile is estimated to have a range of up to around 1,500 miles. The February test-launch flew east toward the Sea of Japan for about 300 miles. The lone successful test last year, in June, prompted Kim’s pronouncement that it has “the sure capability to attack” U.S. targets in the Pacific.