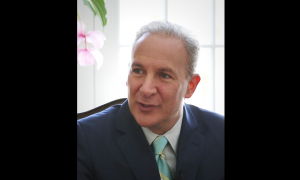 Peter Schiff: What Needs to Happen to Bring Production Back to the US
0
Share Now
TelegramFacebookTweetEmailTellMeWeReddit
Copy Link 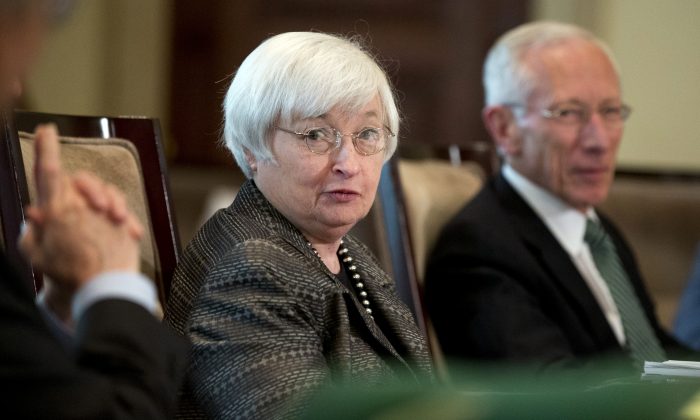 Federal Reserve Chair Janet Yellen (L) with Vice Chairman Stanley Fischer, and the board of governors of the Federal Reserve System, presides over a meeting in Washington, on July 20, 2015. (Manuel Balce Ceneta/AP)
Business

The Federal Reserve’s decision on interest rates Sept. 17 was probably one of the most unpredictable ones, with 58 forecasters expecting no-change and 53 expecting a hike. The Fed’s statement on monetary policy hints it was the developments in China forcing it to stay put.

The Fed’s is looking for progress in “measures of labor market conditions, indicators of inflation pressures and inflation expectations, and readings on financial and international developments,” in order to fulfill its mandate of maximum employment and 2 percent inflation.

“The surprisingly dovish statement was notable for the introduction of ‘international developments’ as an ongoing input into the Fed’s rate deliberation process. To many, this refers to the current uncertainty in China,” he wrote in a note.

He thinks this might merely serve as an excuse for the Fed not to hike rates indefinitely, but the impact of the Chinese crisis on the U.S. economy should not be underestimated.

Epoch Times has previously reported the Fed might even use a rate hike to further exacerbate the problems in China by tightening global dollar liquidity. It has chosen not to do so, which suggests a far more cooperative stance.

This stance might well be warranted as an uncontrollable selling of China’s Treasury reserves could have a very bad effect on long-term U.S. interest rates.

In addition, a collapse in China’s trade (made worse by global dollar scarcity) is hurting U.S. allies like South Korea and Japan in the region and could feed through to the United States itself. By not tightening dollar liquidity further, the Fed is at least not making that situation worse.

In fact, since China is staring into the abyss and U.S. markets are very dependent on accommodative Fed policy, Peter Schiff thinks there might be another round of quantitative easing around the corner.

“A rate hike is supposed to be a signal that the economy has a clean bill of health. But as the patient fails to recover, another dose of QE will be just what the doctor orders.”