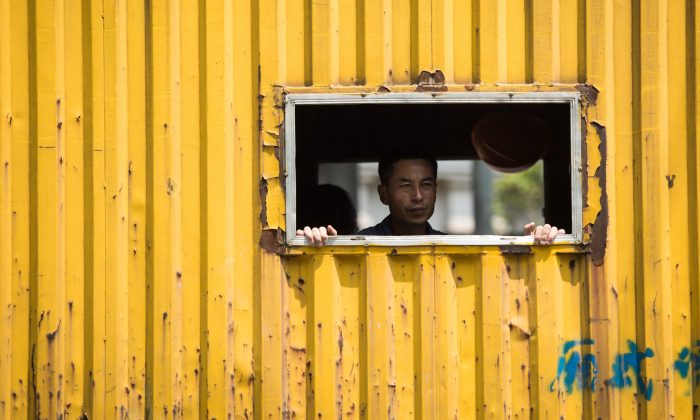 A worker on a truck in Shanghai on Aug. 14, 2015. (Johannes Eisele/AFP/Getty Images)
Business & Economy

Was 2015 a Historic Turning Point for the Chinese Economy?

China ends 2015 with an economic win: The U.S. Congress approved a reform package to boost China’s voting rights at the International Monetary Fund (IMF) from 3.8 percent to 6 percent.

This win, however, is largely symbolic, similar to the inclusion of the Chinese renminbi in the IMF’s reserve currency basket (SDR), which happened in November this year.

In 2015, China gained prestige on the international stage while the economy at home had its worst year since reforms started in earnest in 1992.

In spite of being symbolic and far removed from the day-to-day action of global finance, the IMF’s endorsement of China as a whole is a big win Beijing pursued for years. The inclusion of the yuan into the Special Drawing Rights Basket (SDR) means the IMF thinks the currency, and by extension the whole Chinese political economy, is on par with the dollar, euro, yen, and pound sterling.

Why symbolic? Until China’s plan to replace the dollar with the SDR as the global reserve currency becomes reality, there are too few of the SDRs in circulation ($285 billion) to change the demand for the yuan as a reserve asset. Its use is also limited to member countries, who use it mostly for transactions with the IMF.

Also, the increase in voting rights doesn’t change the power structure at the IMF, since the United States retains veto power with 16.5 percent of total votes. However, it recognizes China’s efforts to build up an alternative power structure to the Bretton Woods financial system set up after World War II. China successfully launched its Asian Infrastructure and Investment Bank this year, convincing even staunch U.S. allies like Australia and the U.K. to participate.

The regime plans more reforms of the exchange rate, interest rates, as well as housing registration next year.

China also refined its efforts to compete in global gold trading and started several initiatives to gain control over global trade, like the Silk Road initiative, which plans to bring another U.S. ally, Pakistan, closer to China economically, as it opens up trade with central Asia and eventually Europe. China launched new clearing centers for the yuan worldwide, now the fourth most used currency in the world.

As part of the reforms to convince the IMF to give it more voting rights and include it in the SDR, China has for the first time since 2009 updated its official gold reserves, which increased more than 60 percent to 1,743 metric tonnes (1,921 short tons). It also lifted the cap on interest rates banks pay out to depositors to shift income to consumers, who are supposed to become the growth engine of the economy. It has somewhat liberalized its exchange rate compared to the dollar, although it is still closely managed. The regime plans more reforms of the exchange rate, interest rates, as well as housing registration next year.

All these reforms move the economy away from a closed-off, centrally planned system to a real market economy fully integrated in the global financial system.

Alas, it may be too little too late and China is now chasing reforms it should have undertaken while the economy was still growing fast. Officially, China will grow at 7 percent in 2015, the lowest rate since 1990. Unofficially, growth has crashed to around 2 percent, with a marked deceleration in the fourth quarter.

In 2015, even the most optimistic analysts realized China’s investment driven growth model is over. Even more so than official data on investment, the plunge in commodity prices as well as producer prices in China suggest a severe slowdown, maybe even outright recession. This unexpected change in demand has left commodity exporters like Russia, Canada, Brazil, and Australia reeling and has wreaked havoc among international mining and commodity giants. They spent hundreds of billions building up their infrastructure to satisfy supposedly never-ending Chinese demand.

We will remember 2015 as a historic turning point for China—and the world.

The only debate still raging among investors and academics is whether the consumer or service sector can take over from manufacturing, investment, and exports. Although there are some signs of resilience in all of these sectors, a real rebalancing will take decades and will be painful, according to Peking University professor Michael Pettis. The consumer just doesn’t have enough income to make up for all the wasteful investment spending.

Wasteful investment spending has created economy-wide debt close to 300 percent of GDP: Debt that needs servicing. This year, reports about defaults and the inability of companies to service their debt have become more frequent, despite the efforts of the regime to provide monetary easing through lower interest rates and different accounting gimmicks, like the local government debt swap program.

Too much debt and too little growth are the main reasons for the stock market boom and bust, as well as the shock currency devaluation in mid-August. Because many firms cannot service their debt loan anymore, the regime engineered a stock market boom, giving companies access to capital, which doesn’t carry interest and doesn’t have to be repaid.

This worked for a while, but because banks created the stock bubble with margin debt, it had to crash sooner or later, and eventually did in July. With the stock market bust, all asset classes in China were impaired and became uninvestable.

The real estate bubble had already burst in 2014. The fact the second half of 2015 was relatively better doesn’t make a big difference. The stock market had crashed and local government bonds or corporate bonds as of the beginning of the year carried the risk of default, something quite unknown to investors in Chinese companies.

These factors worsened a trend, which probably started in mid-2014: capital outflows. Ever since China joined the World Trade Organization in 2001, it has accumulated trillions of dollars’ worth of foreign currency reserves, by running massive trade surpluses and attracting foreign capital. The country still has a trade surplus, but its currency reserves dropped from $4 trillion in 2014 to $3.4 trillion in November 2015. This means capital is leaving the country by the hundreds of billions, probably close to $1 trillion in 2015.

The huge capital outflows ultimately led to the shock devaluation of the yuan in August and are the reason for the drain on foreign exchange reserves, which has persisted ever since. International investors are moving their money to safety in U.S. stocks and bonds, while Chinese citizens gobble up real estate from New York to London.

In 2015 we witnessed a series of tectonic shifts: from capital inflows to outflows; from over investment to falling capital expenditure; from an ever increasing mountain of debt to the first defaults and write-offs. We witnessed reforms marking the beginning of the full integration of the Chinese economy in the global financial system. We will remember 2015 as a historic turning point for China—and the world.