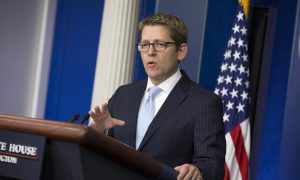 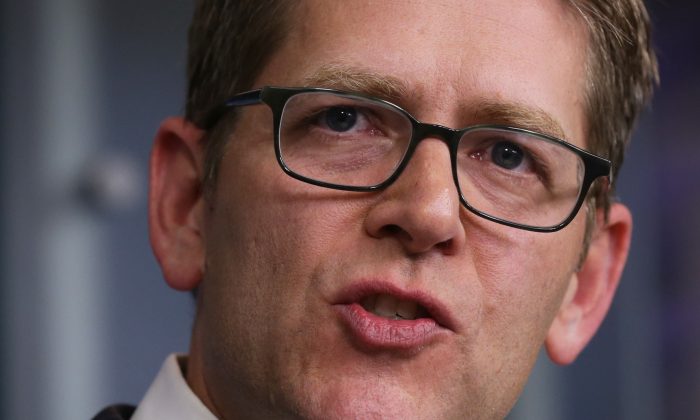 Jay Carney is free. But not loose – at least so far. After resigning as the press secretary for President Obama on June 20, Carney gave insight into the Obama administration’s handling of classified documents, and responded to criticism that this administration has been the most Orwellian in recent history.

“I know — because I covered them — that this was said of Clinton and Bush, and it will probably be said of the next White House,” said Carney in a recent New York Times Magazine interview. “I think a little perspective is useful…It is a serious, serious matter to leak classified information. Some of the debate around this kind of forgets how serious that is.”

But, it could also be the changing nature of the relationship between the media and the White House. At a recent event at the New America Foundation, journalists and historians challenged Carney, arguing that this White House has been more secret than previous occupants.

“Increasingly, the Obama White House has become so brittle, and so controlling of the message, that people are afraid to respond to me,” said Kimberly Dozier, a former Associated Press reporter. She was one of the journalists whose phone records were obtained by the Department of Justice last spring during its investigation into a leak of classified information about a failed Al-Qaeda plot. The scope of that investigation, some critics said, was unprecedented overreach.

But some say that the crackdown by the Obama administration is not due to an extraordinary effort, but rather due to advancements in surveillance.

“[Bush administration] lawyers told me that they wanted to prosecute as many leaks then, but technology had not moved on to the point where it is today, where it is so easy to track peoples’ electronic footprint,” said Dozier, who is now a contributing writer at the Daily Beast. “There are simply more tools for the Department of Justice now than they had back then.”

Thom Shanker, the Pentagon correspondent for the New York Times, noted that his employer has implemented rigorous standards to balance the security risks of reporting classified information with the public’s right to know.

“When we reported on WikiLeaks, we had conversations with all of the relevant agencies, and the takeaway is that the American public learned how it was operating,” said Shanker. “We asked then Secretary of Defense Robert Gates, who was a former C.I.A. director, what he thought about the WikiLeaks story, and he said, ‘As an intelligence professional, I am very upset whenever this happens, but I can tell you that I don’t see any specific damage to our national security programs because of the way the information was handled.'”

But as citizen journalism – people without an official press affiliation reporting on personal blogs – becomes more popular, the way the military and intelligence community is reported on could shift. Random bloggers need not follow the professional standards by which journalists abide.

Matthew Pinsker, a professor of history at Dickinson College, pointed out that this “new” form of journalism is a throwback to previous models which did not value objectivity and impartiality. In some ways, bloggers use the same practices of 19th century pamphleteers, where anybody with a hand-crank could stand on a corner and shout to a group of people.

If these bloggers can’t hold themselves to the same standards of journalists in the 20th Century, “maybe the Obama administration is justified in pursuing leakers in a harsher way,” Pinsker said.

Regardless, as both the news industry and surveillance technology continue to evolve, the White House will have to work harder to determine which offenses merit harsher tactics – to balance national security interests with respect for the fourth estate.

“The government really needs to get its message out to the American people, and it knows that the best way to do that is by using the American news media,” said Shanker. “The relationship between the government and the media is like a marriage; it is a dysfunctional marriage to be sure, but we stay together for the kids.”

Justin Lynch is the Social Media Coordinator at the New America Foundation. Outside of New America, Justin is the Youth Ambassador to the United Nations for Voices of African Mothers, where he works to promote gender equality and educational opportunity in West Africa. He is also a political blogger for the Bangor Daily News. This article was originally published in The Weekly Wonk, New America‘s digital magazine.