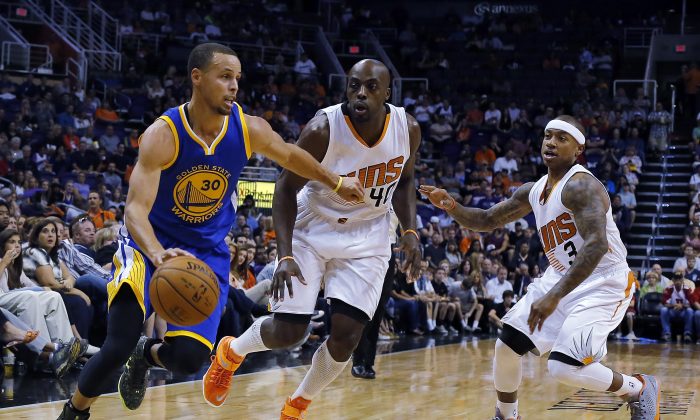 The Golden State Warriors have lost two straight after a strong start and the news and trade rumors have been ramping up.

Curry’s Streak Over But His Defense Improves

Stephen Curry saw his streak of consecutive games with at least one made 3-pointer extend to almost a full season’s worth of games, but it ended in the loss to the Spurs this week at 76.

He was 0-7 from behind the line in the game.

His record is now the fifth-longest streak in league history.

Meanwhile, Curry has stepped up his defense this season, noted USA Today.

He’s become a better on-the-ball defender and also leads the league in steals at 3.5 per game.

“But that’s not the real story. It’s not so much that he’s made vast improvements as a dominate-your-man, on-the-ball defender — he’s converted into completely buying into the team’s defense philosophies, and shading his man towards where the help is build in,” it said.

“His improvements in these areas have made the Warriors defense, at least in the early part of the season, go from good to exceptional. These are the things that turn good teams into championship caliber teams.”

Andre Iguodala is struggling in his new role off the bench, scoring just two points and managing just two assists and five rebounds while committing four turnovers in 53 minutes in the losses to the Spurs and Suns.

Iguodala is trying to click with the second unit, including newcomer Shaun Livingston, and coach Steve Kerr understands that it will take time and that there are streaks of good play, and bad play.

“I thought (Iguodala’s rough night against the Spurs) was just one of those games. The Phoenix game, I didn’t use him the right way. I wore him down a little bit on the second night of a back-to-back. But he was brilliant against Houston. His defense changed the game for us,” Kerr told the Mercury News.

“It’s part of being in the NBA. There are ups and downs. I’m not worried about Andre at all. He’s one of our captains. He’s one of our smartest players. We’re figuring out some things, though. We’re new together, and we’re trying to play with some different rotations.”

Despite the rough stretch, general manager Bob Myers said on his weekly radio show that Iguodala is on board with continuing to come off the bench and fit in where he can.

“He’s aware he can play better, and he’s doing everything he can,” Myers said. “This guy’s a professional. He’ll find his way.”

But the change has prompted some to call for Igoudala to be placed back in the starting lineup now that Livingston is healthy.

On the other hand, Harrison Barnes, who has been starting at small forward, is playing well.

Barnes posted a season-high 22 points on 9-of-12 shooting against the Spurs, along with 8 rebounds and a blocked shot.

“Harrison was fantastic,” Kerr told SF Gate. “Harrison is capable of that. It was good to see him get going.”

Kerr told Barnes to look to shoot more after Barnes attempted just nine shots in the two games prior to the Spurs game.

“That’s something I took to heart,” Barnes said.

“When you move and you have great shooters out there, you just fall into baskets. Whether its Andrew Bogut hitting you on a cut or Steph coming off a pick-and-roll and hitting you for a wide-open three, when we’re moving the ball like that, it’s easy to get great shots.”