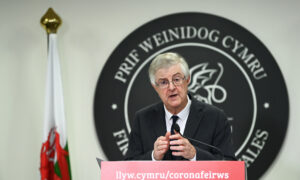 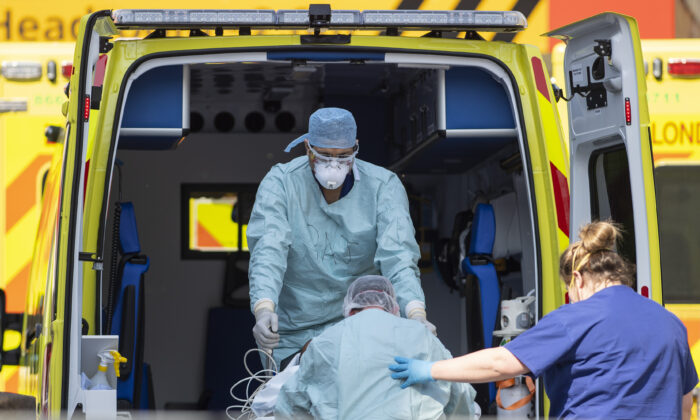 NHS workers in PPE take a patient with an unknown condition from an ambulance at St Thomas' Hospital in London on April 10, 2020. (Justin Setterfield/Getty Images)
UK

The town of Warrington starts the highest level of COVID-19 measures from midnight, with 200,000 people joining the 7.1 million already under Tier 3 in the north of England.

The council said an uptick in infections had pushed them to accelerate plans by two days, with the original plan to introduce restrictions on Thursday.

“We know that our case numbers in Warrington remain stubbornly high,” leader of the council, Councillor Russ Bowden said in a statement. “But what is more concerning is the number of admissions into hospital.”

“The upsetting and grim reality is that there are more people in hospital, more people in intensive care beds and more people being taken by the virus, and we need to do all we can to try to bring this under control.”

Announcing the new measures, the council said it had secured a £5.9 million support package, with £4.2 million earmarked to support businesses.

The decision was made jointly by the central government and the Warrington council. The measures, which come into force at 00:01 a.m. on Tuesday, are to be reviewed in 28 days.

Health and Social Care Secretary Matt Hancock said in a statement, “I know that these new measures will mean sacrifices must be made by the people in Warrington, and I want to extend my thanks to each and every one of them for recognising the severity of the situation and sticking to the rules.”

According to the Department of Health and Social Care, infection rates in the town are among the highest in the country at 361 cases per 100,000.

The four other regions already under Tier 3 restrictions, which also correspond to the highest infection rates, are all in the north: South Yorkshire, Liverpool, Greater Manchester, and Lancashire.

Tier 3 restrictions include a ban on pubs opening unless they are serving meals.

The three-tier approach is unique to England.

Scotland, Wales, and Northern Ireland have adopted their own rules and measures to tackle the spread of the CCP (Chinese Communist Party) virus.

Wales on Friday entered what it’s calling a “firebreak” lockdown, with people asked to stay at home “except for very limited purposes”, for two weeks.

First Minister Mark Drakeford previously said that the firebreak measures were strictly time-limited and would come to an end on Nov. 9—even if numbers have not come down.

Welsh officials have been frustrated that their messaging over the firebreak has been pulled off track over the weekend by anger over supermarkets blocking aisles and covering shelves that stocked “non-essential items”.

Health Minister Vaughan Gething said during a briefing on Monday that the rules already allow some discretion for people who are in “acute need to buy the basics which are essential to them”.

“We’re meeting retailers this afternoon to review the regulations and guidance to make sure that it is being applied fairly and consistently,” he told reporters. “If there are anomalies, we will look at whether the guidance needs to be revised or strengthened to make it clear that supermarkets have some discretion to sell to people who are in genuine need.”