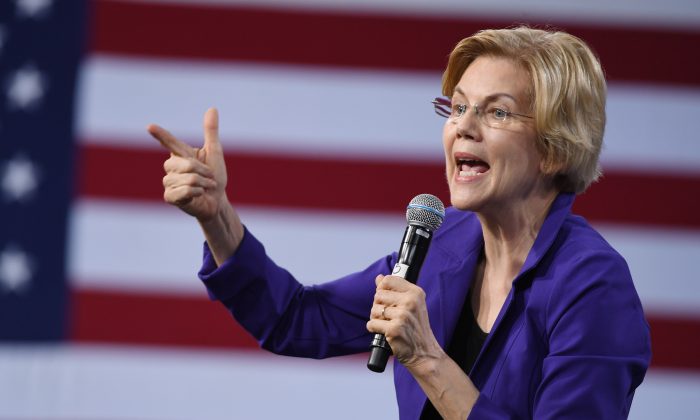 WASHINGTON—Dozens of influential think tanks in the nation’s capital regularly issue reports critiquing government programs and campaign policy proposals, so it was no surprise when one recently appeared on Sen. Elizabeth Warren’s student loan plan.

What was totally unexpected, however, was the source and intensity of the criticism of the Massachusetts Democratic presidential candidate’s idea.

“How progressive is Senator Elizabeth Warren’s loan forgiveness program?” asked Adam Looney, senior fellow of the liberal Brookings Institution. Not at all, Looney argued in his April 24 analysis that was re-issued with no changes on April 30.

That Brookings—one of Washington’s most respected and faithfully liberal think tanks—would issue a report shredding Warren’s proposal as not sufficiently progressive was startling.

More stunning is that Looney also directs the Center on Regulation and Markets for the Tax Policy Center, a joint effort of Brookings and the Urban Institute, another liberal Washington think tank.

Warren’s two-part plan cancels up to $50,000 in student loan debt for 42 million of the 45 million borrowers, which she estimates would eliminate all debt for about three-quarters of them.

The second part is to “give every American the opportunity to attend a two-year or four-year public college without paying a dime in tuition or fees,” she wrote in a post on Medium.

Warren would fund her program via her “Ultra-Millionaire Tax,” an added 2-percent levy on the estimated 75,000 American families “with $50 million or more in wealth.”

The loan forgiveness approach was the latest in a series of detailed policy proposals by Warren. Despite the substance, though, Warren continues to lag in surveys, with single-digit support among Democratic voters.

Looney was unsparing in his assessment of Warren’s approach to dealing with the college student loan problem that was $675 million in 2009 and now totals $1.52 trillion, an average per 2017 borrower of $27,975, according to a study released April 30 by financial industry analyst LendEDU.

“Despite her best intentions and her description of the plan as progressive, a quick analysis finds the Warren proposal to be regressive, expensive, and full of uncertainties … the top 20 percent of households receive about 27 percent of all annual savings, and the top 40 percent about 66 percent.

An unnamed Warren aide responded to Looney’s analysis, telling Yahoo News, “This is a highly progressive proposal—we’re taxing the fortunes of people with over $50 million in wealth to provide student loan debt cancellation to 42 million lower-income and middle-class Americans.”

Democratic strategists interviewed by The Epoch Times defended Warren. Christian Hanley, who also hosts the “Keep It In Perspective” podcast, dismissed Looney’s analysis as “inside baseball.”

Hanley also questioned whether “an everyday voter who is concerned about the actual cost of sending their kid to school—or paying for groceries or health care for that matter—is going to stop to dissect the minutiae or engage in a policy debate.”

Jim Manley, former communications director for then-Senate Majority Leader Harry Reid (D-Nev.), also pointed to the challenge of garnering support for detailed solutions, saying “the issue of what, if anything, to do about the student-loan debt issue is complicated stuff, and proponents are simply going to have to do a better job of selling it to the public.”

Manley added that “it’s a good thing that we have candidates that are pushing the envelope when it comes to policy. We have some pressing needs … and the time for small-bore solutions has come and gone.”

Another Democratic strategist, Jimmy Williams, a former senior economic adviser to Sen. Dick Durbin (D-Ill.), blasted Looney’s analysis, saying it is “filled with counter-arguments to his thesis” but conceded that Warren’s proposal “does nothing to stop these public universities from gouging America’s kids.”

Looney’s analysis was cheered by Republican National Committee (RNC) spokesman Steve Guest, who told The Epoch Times that “it’s a sure sign that progressive darling Elizabeth Warren’s latest pie-in-the-sky, big-government expenditure is bad when even the liberal Brookings Institution pans it.”

Matt Mackowiak, president of the Potomac Strategy Group, said Warren’s proposal “would benefit wealthier people far more than it would poorer people. It’s a transparent attempt to create enthusiasm for her flagging campaign among young people.”

Brian Darling, a former aide to Sen. Rand Paul (R-Ky.), told The Epoch Times that the United States “is at a crossroads where we can attack our national debt and find ways to make the government solvent or pivot toward policies that will put us on the road to insolvency. Warren has chosen insolvency and socialist policies that have sent many nations into economic stagnation.”

“Most likely the [Brookings report is the] beginning of a four-walls effort by The Swamp to discredit all those in the 2020 Democratic presidential primary field who—most sentient people who understand practical politics realize—will suffer a devastating loss to Trump,” veteran political observer Jameson Campaigne told The Epoch Times.
“Such a loss—a 40-plus-state Trump win, the Republicans also taking both houses of Congress—could well unplug the currently-clogged drains under The Swamp and precipitate real radical reform of the national government.”

Correction: A previous version of this article misstated the year used to calculate the average borrower. The year was 2017. The Epoch Times regrets the error.