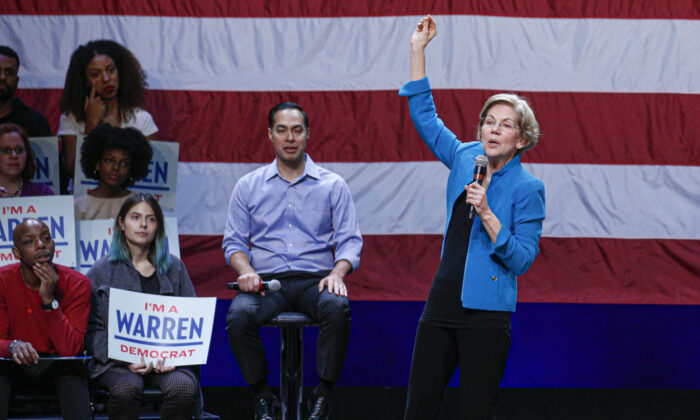 Among those attending Warren’s 42-minute speech was Liah Margulies, 75, both “for the fun of it” and out of curiosity about “the people coming out for her.”

She said she tends to agree with “a lot of things” Warren says or supports, but hasn’t read all of her policy proposals.

“Just what’s in the newspapers or when she’s interviewed on MSNBC or something,” she said.

She couldn’t name something in Warren’s proposals that caught her interest, but said she admired the senator for developing them.

“I like that fact that she even has them versus other people who don’t articulate, you know, what they are really standing for,” she said.

A lifelong anti-corporate activist, musician, and public interest lawyer, Margulies said she’s still unsure whether to pull the lever for Warren or Sen. Bernie Sanders (I-Vt.), whom she supported in the 2016 primary.

Sharon Shapiro, 29, on the other hand, is already fully on board with Warren and ready to help with the campaign as well.

“I love that she has so many detailed plans and that she really lays out her vision in a very accessible way,” she said.

The health care plan centers around a transition to a single-payer, “Medicare for All” model, in which the federal government takes over financing and eliminates private health insurance.

Two University of California–Berkeley economists tapped by Warren estimate her plan would need more than $20 trillion in new government spending over 10 years. She plans to pay for it mostly with administrative savings, negotiating lower prices for drugs, military spending cuts, better tax collection enforcement, and new taxes on the rich. She promises savings of $11 trillion for the middle class over 10 years.

Some experts have called Warren’s predictions unrealistic, saying health care services would be affected or additional middle-class taxes would need to be imposed to pay for the plan, as well as the issue of 2 million people currently employed by the private insurance industry who would lose their jobs. Republicans have also opposed the plan on the grounds that it eliminates people’s freedom to pick their insurance provider.

Shapiro, who works for a tech startup, disagreed with the criticism regarding financing.

“She’s clearly laid out how she’s going to pay for it,” she said.

The biggest problem, however, seems to be the lack of appetite in Congress for Medicare for All, even in the Democrat-majority House, whose speaker, Nancy Pelosi (D-Calif.), has said she’s “not a big fan.”

Warren’s student loan plan proposes that the government pay off about 41 percent of the $1.56 trillion students owe for their higher education.

She plans to pay for it, among other things, with a new 2 percent tax on all assets above the first $50 million a person is worth, including residences, businesses, items worth more than $50,000, stocks, bonds, retirement savings, as well as assets in trusts or held by minor children. Billionaires would hand over another 4 percent of all of their assets above $1 billion every year.

Some experts have questioned whether the tax would raise the $3.75 trillion that Warren expects it to over 10 years, saying people have been able to find various ways to make their net worth look smaller to avoid paying tax. Most other developed countries have abandoned wealth taxes, citing reasons such as trouble with collection and negative effects on investment.

Warren has responded with promises of tough enforcement, including boosting the budget of the IRS, and a 40 percent exit wealth tax on anybody who would renounce their citizenship to avoid the tax.

Then there’s the question of whether confiscating somebody’s wealth, albeit gradually, is constitutional. Some lawyers say the Constitution bars a wealth tax, while others say it’s legal.

From a principled point of view, Warren argues that it’s fine to take more from the rich since they built their fortunes partly using taxpayer-funded services and infrastructure.

The top 0.1 percent of America’s highest-earning families are estimated to pay more than 15 percent of all federal taxes while pocketing 9 percent of all cash income in 2019, according to the Treasury (pdf). Their dollars will mostly pay for Americans’ Social Security payouts, health care for the poor and the elderly, the military, and the interest on government debt.

As for repaying a chunk of the student debt, Shapiro doesn’t see it as a dangerous precedent, saying education is “far too expensive” in the United States.

“It’s inhibiting people from going to school and doing things that they want to be doing and growing and moving up in the ladder in terms of their socioeconomic status,” she said.

Warren also dismissed the idea that the bailout would send a message to the higher education system that it can charge students whatever it wants and the government will eventually foot the bill.

“I don’t think it would set that kind of precedent at all,” she said. “I think it’s a problem that needs to be solved. In the long term, the price of that education does need to be worked on, but I think this is the place to start in fixing it.”

Doctoral student Aaron Doughty, 31, said he’s “in line” with Medicare for All and believes Warren has a “greater chance” of drafting a plan that supporters of the policy can all agree on.

He said he hasn’t looked at her policies in-depth.

He noted that the senator has “a meticulous nature to the way she addresses policy,” contrasting Warren with some other candidates who, in his view, have taken a more “laid back approach” and present more of a vision rather than policy proposals.

He’s also still considering Sanders, although he said Warren is a better candidate to “cross” the “liberal, left-leaning” and “the more progressive leftist politics.”

The rally was attended by 3,300 people in the main hall and another 1,500 in a spillover venue, Warren’s campaign told The Epoch Times via email.

Update: The article has been updated with information about the attendance at Sen. Elizabeth Warren’s rally.