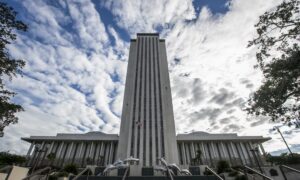 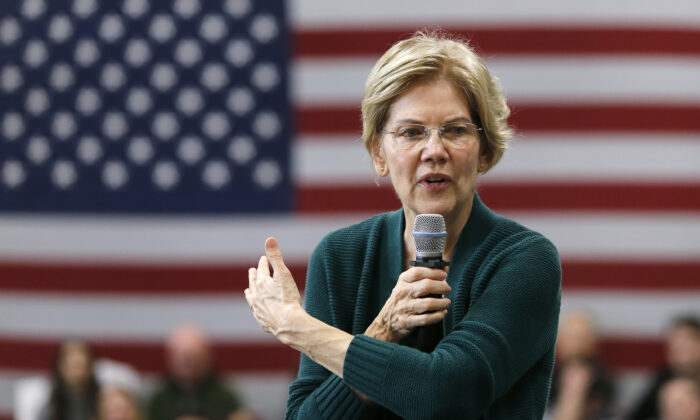 Sen. Elizabeth Warren (D-Mass.) has raised concerns about Facebook over its decision to uphold its ban on former President Donald Trump, saying the social media giant has become too powerful and should be broken up.

Warren was interviewed on Yahoo Finance and Cheddar News on May 5, the day that Facebook’s oversight board—an advisory body some have dubbed the “Supreme Court”—said that the continued suspension of Trump “was necessary to keep people safe.”

Commenting on the ban, Warren told Cheddar News she was glad Trump remains off the platform, but that Facebook’s move was worrying.

“I’m glad that he’s not on Facebook,” Warren said. “I think that he poses a real danger. But I don’t think that Facebook ought to have this kind of power.”

“We need to break up these giant tech companies,” Warren said. “And Facebook is one of them.”

In remarks to Yahoo Finance, Warren struck a similar tone in criticizing the heavy footprint of Big Tech.

“This is just further demonstration that these giant tech companies are way, way, way too powerful,” she said, responding to a question about the Trump ban. She also took aim at the “Supreme Court” nickname.

“Listen to the arrogance of it,” Warren said. “The name of the group that made the decision is called the Supreme Court. I missed the part where those people had hearings in front of Congress, and were voted on before they were made decision-makers with this kind of authority.”

The oversight board’s upholding of Trump’s ban from Facebook prompted a fiery missive from the former president on his new communications platform, “From the Desk of Donald J. Trump.”

“What Facebook, Twitter, and Google have done is a total disgrace and an embarrassment to our Country. Free Speech has been taken away from the President of the United States because the Radical Left Lunatics are afraid of the truth, but the truth will come out anyway, bigger and stronger than ever before,” Trump wrote, adding that “these corrupt social media companies must pay a political price.”

While Trump didn’t detail the repercussions he had in mind for Big Tech, he later touted a new book by Sen. Josh Hawley (R-Mo.), who has been a vocal advocate of breaking up Big Tech.

“Josh Hawley, our fantastic Senator from the beautiful and great State of Missouri, has a fantastic new book, just out this week, about the terrible Big Tech companies and their attempt to ruin our Country. It’s called The Tyranny of Big Tech—it has my Full and Complete Endorsement,” Trump wrote in a message on his platform on May 7.

Hawley’s new book, in which he argues that Big Tech poses the biggest threat to American freedoms in decades, is currently No. 1 on Amazon’s Media & Internet in Politics chart and No. 38 on Amazon’s overall list of best sellers.

“Amassing unimaginable amounts of personal data, giants like Google, Facebook, Amazon, and Apple—once symbols of American ingenuity and freedom—have become a techno-oligarchy with overwhelming economic and political power,” the book’s summary states, echoing remarks on Hawley’s website, which calls for Big Tech to be broken up.

“We need a trust-busting agenda for the 21st century that puts power back into the hands of the American people. We have to make it easier for enforcers to break up megafirms, crack down on mergers and acquisitions by monopoly companies, strengthen antitrust enforcement to pursue the breakup of dominant, anticompetitive firms,” Hawley’s website states in the context of his recent legislative proposals to rein in the power of the biggest corporations.

In April, Hawley introduced the Bust Up Big Tech Act (pdf) and the Trust-Busting for the Twenty-First Century Act (pdf), new legislation that challenges Big Tech dominance by such measures as drastically increasing antitrust penalties and banning major companies from competing with third-party vendors on their platforms.

Critics on the right have accused social media giants of stifling free speech, arguing that much of the companies’ moderation in recent times has unfairly targeted conservative speech and Trump supporters.