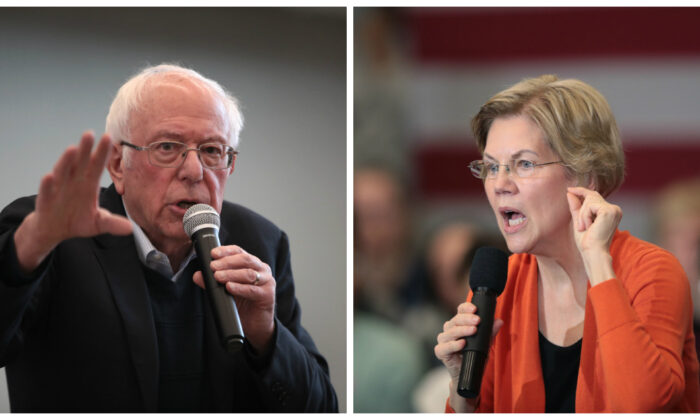 Warren, Sanders Clash Over What Was Said During 2018 Meeting

Sens. Elizabeth Warren (D-Mass.) and Bernie Sanders (I-Vt.) clashed over their recollections of a 2018 meeting, with Warren claiming Sanders told her that a woman couldn’t win the presidency while Sanders insisted he didn’t make that claim.

The story began circulating in news outlets on Jan. 13. Citing sources who weren’t in the room during the meeting, the reports claimed that Warren was told that a woman couldn’t win the presidential race.

Sanders said in a statement about the December 2018 meeting, “It is ludicrous to believe that at the same meeting where Elizabeth Warren told me she was going to run for president, I would tell her that a woman couldn’t win.”

“It’s sad that, three weeks before the Iowa caucus and a year after that private conversation, staff who weren’t in the room are lying about what happened,” he continued.

“What I did say that night was that Donald Trump is a sexist, a racist, and a liar who would weaponize whatever he could. Do I believe a woman can win in 2020? Of course! After all, Hillary Clinton beat Donald Trump by 3 million votes in 2016.”

Sanders’s campaign manager Faiz Shakir said that the story “is a lie.” He called on Warren to call the story “a lie.”

But when Warren issued a statement on Monday night, it was to say the story was true.

“Bernie and I met for more than two hours in December 2018 to discuss the 2020 election, our past work together, and our shared goals: beating Donald Trump, taking back our government from the wealthy and well-connected, and building an economy that works for everyone,” she said.

“Among the topics that came up was what would happen if Democrats nominated a female candidate. I thought a woman could win; he disagreed.”

Warren said she didn’t want to discuss the private meeting any further “because Bernie and I have far more in common than our differences on punditry.”

“We have been friends and allies in this fight for a long time and I have no doubt we will continue to work together to defeat Donald Trump and put our government on the side of the people,” she added.

Around the time the statement was released, Sanders’s campaign adviser Jeff Weaver went on CNN to defend Sanders.

“The truth of the fact is, you look at his book in 2015, he deferred to her in 2015 to run,” he said, also noting that Clinton won the popular vote in 2016. He also referenced archival footage from the 1970s and ’80s that showed Sanders saying that a woman should be president.

“I also met with @BernieSanders before announcing my candidacy. We had a nice one-on-one conversation and I informed him that I would be running for president,” she said in a Twitter post. “In that meeting, he showed me the greatest respect and encouragement, just as he always has.”

The topic is sure to come up when Sanders, Warren, and some other contenders take the debate stage on Tuesday night.