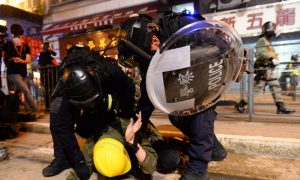 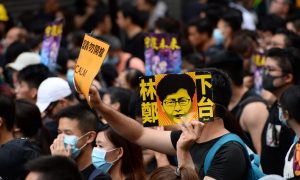 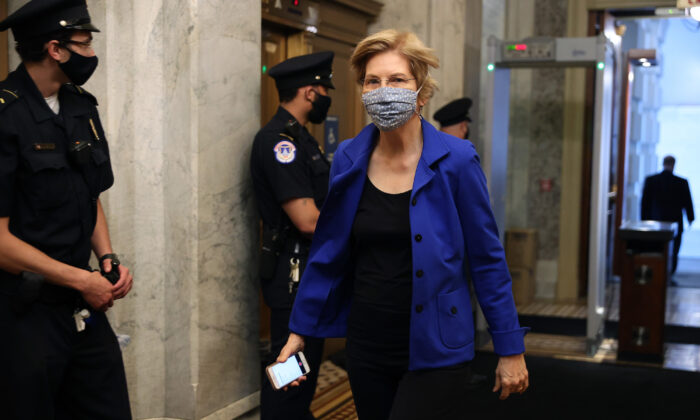 Sen. Elizabeth Warren (D-Mass.) arrives at the U.S. Capitol, in Washington for a vote May 18, 2020. (Chip Somodevilla/Getty Images)
Politics

Warren, Pressley Announce Bill Making It a Crime for Police to Deny Medical Care to Suspects In Custody

Sen. Elizabeth Warren (D-Mass.) and Rep. Ayanna Pressley (D-Mass.) said Friday they will introduce a bill making it a crime for police not to provide medical care to people in their custody.

According to a draft of the bill (pdf), the legislation seeks “to require Federal law enforcement and prison officials to obtain or provide immediate medical attention to individuals in custody who display medical distress.”

Senators Kirsten Gillibrand (D-N.Y.) and Edward J. Markey (D-Mass.) are co-sponsors of the bill, which is named after Andrew Kearse, a 36-year-old black man who died of a heart attack in the back of a police cruiser in 2017 after pleading with officers for medical assistance.

“Andrew Kearse died begging for help and the police officer who looked the other way got off scot-free,” Warren said in a statement. referring to the fact that no charges were brought against the officers in the case.

“Andrew Kearse should be alive. To be denied medical care while in police custody is cruel and inhumane,” Pressley said. “Far too many Black Americans have died in police custody. As the COVID 19 pandemic ravages our communities, including those behind the wall, we must codify in law that officers should be held criminally liable for denying medical care to people in custody.”

Warren added that the bill is “just one step” on the road to “a complete overhaul of our policing and justice systems.”

The bill comes amid a broader drive to reform policing methods in the wake of the police custody death of George Floyd, who died in Minneapolis on Memorial Day, after a police officer restrained him with a knee to the neck for nearly nine minutes as he gasped for air and said, “I can’t breathe.”

“When they saw it, it radicalized them into saying we got to act and it worked,” Biden said of the video that showed now-former Minneapolis police officer Derek Chauvin with his knee on Floyd.

Floyd’s official cause of death, according to the full 20-page report made public on Wednesday by the Hennepin County Medical Examiner’s Office, was cardiopulmonary arrest while Floyd was being restrained by police.

The autopsy also cited “complicating law enforcement subdual, restraint, and neck compression.” The manner of death was listed as homicide.

“The country now is having trouble breathing. They’re angry. And I think they’re ready to move,” Biden said. “And we have to change the institutional structures, everything from police brutality, racism writ large, but also the things that make life better for people,” Biden said, noting improved access to healthcare, daytime child care, and education.”

Biden listed changes to policing that he believes are necessary, including improving oversight and accountability and outlawing chokeholds.

“We need to review our hiring practices, our training practice, our de-escalation practices and hold bad cops accountable,” the 2020 White House hopeful said.

Amid moves to reform policing practices, the Minneapolis City Council on Friday voted to approve an agreement that will no longer allow the city’s police forces to use neck restraints and chokeholds.

The agreement also imposes measures meant to increase transparency and accountability around police discipline cases and the use of crowd-control weapons, including chemical agents, rubber bullets, flash-bangs, batons, and marking rounds.

Also, any officer who sees another officer commit any unauthorized use of force, including any chokehold or neck restraint, must try to intervene verbally and even physically. Failure of an officer to intervene will subject him or her to discipline as severe as if they themselves had used the prohibited force.