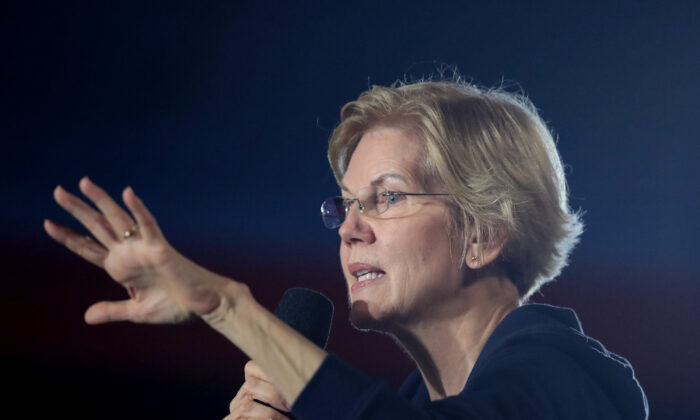 Warren: ‘I Shouldn’t Have’ Claimed to be Native American

Sen. Elizabeth Warren (D-Mass.) said she should not have claimed to be Native American, the latest mea culpa this year after boasting about DNA test results last year.

Warren in 2018 said a DNA test proved that she had Native American ancestry, telling President Donald Trump he owed money to a charity of her choice. Trump had challenged Warren to take a test, ridiculing her claims.

The test showed she had as little as 1/1024th Native American heritage, which would be less than most people descended from Europeans.

Warren, 70, apologized in public for the first time in August about her claim of Native American heritage, saying she regretted “the harm that I have caused.”

Asked about the issue at a New Hampshire town hall on Dec. 6, Warren said she’s not a Native American.

“I grew up in Oklahoma and my three older brothers and I learned about our family the same way most people do, from our mom and our dad. My family is very important to me and that’s why, many years ago, I sometimes identify as Native American,” she said, claiming that the identity “never had anything to do with any job that I got, or any benefit.”

Warren wrote “American Indian” on one of her job applications and was described as Harvard Law School’s “first woman of color.”

“But even so, I shouldn’t have done it. I am not a person of color, I am not a citizen of a tribe. And I have apologized for confusion I have caused on tribal citizenship, on tribal sovereignty, and for any harm that I’ve caused,” Warren added on Friday.

Some Native American leaders have expressed dismay over Warren’s claims but others have said they support her, especially after her apologies.

Warren has slowly deleted posts and videos from her campaign website and social media about her previous claims, including a documentary-style video that showed her discussing the results of her DNA test with relatives that she widely promoted just after the test was taken.

Earlier in the day, Warren’s campaign released a medical report that showed her doctor describing her as a “very healthy 70-year-old woman.”

“Senator Warren is in excellent health and has been throughout the 20 years I have served as her physician,” said Dr. Beverly Woo, an associate professor at Harvard Medical School and senior physician at Brigham and Women’s Hospital. “There are no medical conditions or health problems that would keep her from fulfilling the duties of the president of the United States.”