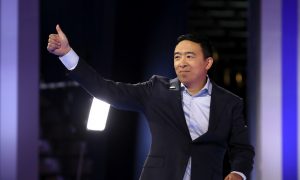 Andrew Yang Says His Campaign Will Give $12,000 Each to 10 Different Families
0
Share Now
TelegramFacebookTweetEmailTellMeWeReddit
Copy Link 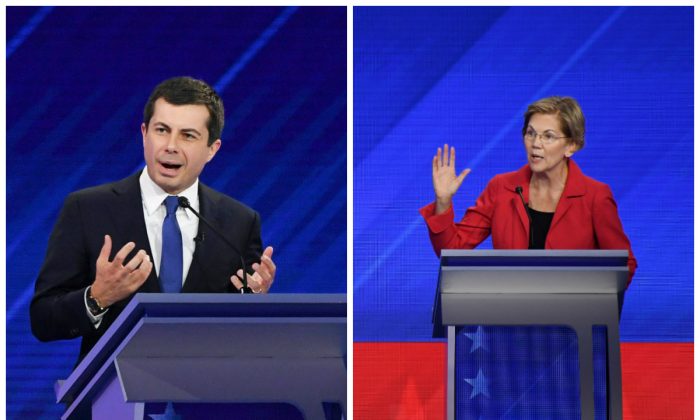 Warren, Buttigieg Say They Would Pull All Troops out of Afghanistan

Sen. Elizabeth Warren (D-Mass.) said during the Democratic presidential debate on Sept. 12 that she’d pull all American troops out of Afghanistan, even without a deal with the Taliban.

“We need to bring our troops home. And then we need to make a big shift. We need to stop asking our military to solve things that cannot be solved militarily. We cannot bomb our way out of Afghanistan.”

Warren said America should work with allies across the world “to root out terrorism.”

She cited economic investment and bolstering the State Department as priorities.

She said she and late Sen. John McCain (R-Ariz.) traveled to the country together. “We talked to military leaders, American and local leaders, we talked to people on the ground, and asked the question: ‘Show me what winning looks like. Tell me what it looks like.'”

South Bend, Indiana Mayor Pete Buttigieg, who deployed to Afghanistan, was then asked about withdrawing troops.

Buttigieg said that ground troops are not necessary to ensure that the country is not used as a base for terrorists.

If he’s elected, Buttigieg said military force will have a built-in three-year sunset clause triggering a congressional vote to renew.

Former vice president Joe Biden said that he’s regularly traveled to Afghanistan and that he was opposed to the surge there.

He said Afghanis can provide bases the U.S. military can use if they have to conduct operations there but also said he doesn’t think ground troops are necessary.

He said he regrets his vote for then-president George W. Bush’s invasion of Iraq.

Entrepreneur Andrew Yang said he signed a pledge “to end the endless wars.”

He said America “is not good at rebuilding countries,” citing the turmoil in Puerto Rico, a U.S. territory, as an example of that alleged weakness.

Rep. Tulsi Gabbard (D-Hawaii) and billionaire Tom Steyer just missed qualifying, and both took issue with the requirements set by the Democratic National Committee. Castro, the last to qualify, met the requirements on Aug. 20, more than a week before the deadline.

Candidates who didn’t qualify for the September debate still have a chance to qualify for the next debate, which will be held in October. Details for that debate haven’t been announced as of yet.