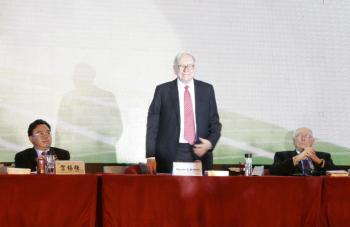 Li, 44, a hedge-fund manager, assisted Buffett’s Berkshire Hathaway, Inc. to find profitable investments in China. In 2008 Buffett bought a ten percent share in BYD’s stock, investing US$230 million. Li is a relatively unknown fund manager whose investments bring a 26.4 percent annual return. Rumors have it that he may one day succeed Buffett.

This is not Li's first return to China, but it is his first overt one. According to the Hong Kong-based Apple Daily, the Central Propaganda Department has ordered the Chinese media not to videotape him.

An Exception to the Rule

Cheuk-yan Lee, deputy chair of the Hong Kong Alliance in Support of Patriotic Democratic Movements in China, believes the only reason for Beijing to let Li return to China is that the regime smells profit— his actually succeeding Buffet would enormously impact the future international financial market.

Rev. Chu Yiu-Ming, who initiated the Home-Coming Movement, pointed out that at least 500 exile democratic activists are on Beijing’s wanted list and cannot return to China.

Chu thinks many of them are still active in the pro-democratic movements and are thus prevented from returning openly. Most traveled back for business, and were forbidden to have anything to do with politics.

Li was born in Tangshan, Hebei, in 1966, around the time of the Cultural Revolution. When he was nine-years-old his father was sent to a coal mine for “reeducation” and his mother was incarcerated in a forced labor camp. As a child he stayed with different families, eventually living with a miner; a 7.8-magnitude earthquake hit Tangshan in 1976 and killed the foster family.

Li was one of the 21 wanted student leaders in the Tiananmen movement, and with thousands of others fled from the square when the massacre began on June 4. He hid in Beijing for a few days and then headed south. In June, he stowed away to Hong Kong and ended up in Paris in July. He once told the media, “I have seen and I swear on my life that hundreds died at Tiananmen Square alone, and two to three thousand died on the streets during the massacre.”

Once in Paris, he was among those who initiated the Federation for a Democratic China. He eventually emigrated to the U.S. and earned three degrees: a B.A., an M.B.A., and a J.D. from Columbia University in 1996.

Li met Buffett in 1993. After Buffett’s talk he began investing in the stock market, and is now a successful Wall Street investor.

With Li’s help, Buffett’s company MidAmerican Energy Holdings, owned by his investment firm Berkshire Hathaway, bought 225 million shares of BYD stock on Sept. 29, 2008, when it was at 8.4 yuan per share. Buffett showed his interest in BYD’s electric cars and green batteries, and the purchase led to a quick rise in BYD’s stock price, increasing to 88.4 yuan per share on Oct. 23, 2009.

According to a July Wall Street Journal article, since 1998, Li’s hedge funds have earned an annual compound return of 26.4 percent, while that for Standard & Poor’s 500 stock index during the same period was only 2.25 percent.

Li's occupation in the financial world excludes him from involvement in the democratic movement, except for introducing himself to the Western mainstream as a former 1989 student leader, when addressing an audience.

Li supposedly helped turn ownership of an U.S.-based web company, Duowei News, over to a pro-Beijing businessman. According to Boxun.com, after Wang Haipin bought Duowei News, Duowei’s editorial department moved from the U.S. to Beijing, and the content of the website underwent significant changes. While previously Duowei would feature criticism of the Chinese regime, afterwards its content became what the Chinese would call “a little scolding, an enormous help.” Being among the first investors and stock-holders, Li’s role in Duowei’s change of ownership remains controversial.

Szeto Wah, chairman of Hong Kong Alliance in Support of Patriotic Democratic Movements in China is nevertheless supportive of Li, citing Li's two donations to the alliance the past 21 years, each time amounting to US$3,000. The alliance is still the voice for the June 4th victims.