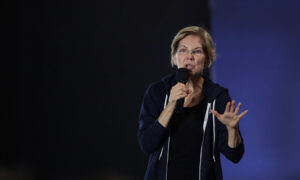 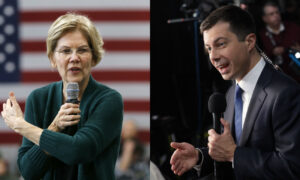 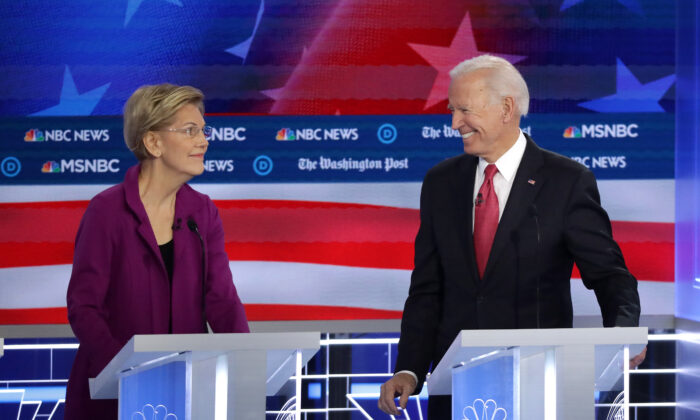 Warren, Biden Open to Each Other as Possible Vice Presidents

Former Vice President Joe Biden and Sen. Elizabeth Warren (D-Mass.) both expressed openness to naming the other their vice president if they win the Democratic presidential nomination.

Biden, 77, and Warren, 70, are two of the top contenders vying to challenge Republican President Donald Trump, 73.

“I’d add Sen. Warren to the list. I’d add all…” Biden told Axios in an interview released on Dec. 8. “But she’s going to be very angry, my having said that. The question is, would she add me to her list?”

Biden was asked why he didn’t name Warren when he reeled off the descriptions of a number of people earlier this year while discussing potential vice presidents.

Warren told the Associated Press on Sunday that she would be “open” to asking Biden to reprise his old job.

She also said that she would consider naming a female vice president. “Sure, why not?” she said. “I think [voters] would support a lot of different combinations.”

“Look, it would be presumptuous of me to be talking about individuals, but I’m open to getting this right because that’s what we want to do,” Warren added. “We want to build a Democratic ticket and a stronger Democratic Party that’s ready to get out there and compete at the national level, at the state level, at the local level.”

Biden said last month while campaigning in Iowa that he would consider Sally Yates, the former assistant attorney general who was fired in 2017; Stacey Abrams, who lost the 2018 gubernatorial race in Georgia; and the two U.S. Senators representing New Hampshire, Senators Maggie Hassan and Jeanne Shaheen.

Biden also said after Sen. Kamala Harris (D-Calif.) dropped out of the race that he’d be open to naming her as his vice president.

The other two Democratic frontrunners, Sen. Bernie Sanders (I-Vt.) and South Bend Mayor Pete Buttigieg, have not floated vice president possibilities. Trump has said that Vice President Mike Pence will join him in running for reelection.