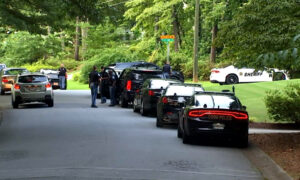 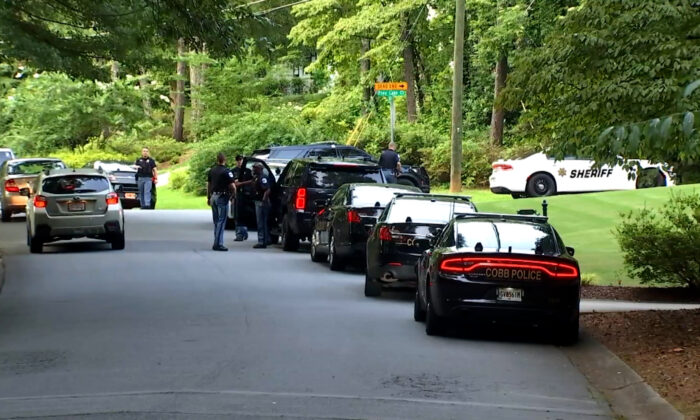 Cobb County police converge on the Pinetree Country Club in Kennesaw, Ga., on July 3, 2021, after the club pro's body was found on the course. (Courtesy of WGCL)
Crime and Incidents

KENNESAW, Ga.—Two of the three men found fatally shot at a suburban Atlanta golf course had their hands, legs and mouths bound with tape when police discovered their bodies in the bed of a pickup truck last weekend, according to court records released Friday.

The details were included in arrest warrants for 23-year-old Bryan Rhoden, news outlets reported. He was arrested Thursday by Cobb County sheriff’s deputies and U.S. marshals on charges of murder, aggravated assault and kidnapping related to the July 3 slayings.

Investigators say Rhoden fatally shot Gene Siller when the 46-year-old golf pro went to find out why a white pickup truck had driven onto the 10th green at Pinetree Country Club in Kennesaw, northwest of Atlanta.

Two other bodies were found bound and gagged in the bed of the pickup truck. Police said both died from gunshot wounds. They were identified as 46-year-old Henry Valdez of Anaheim, California, and 76-year-old Paul Pierson of Topeka, Kansas.

Investigators believe that Siller was slain because he came upon a “crime in progress,” police have said. It doesn’t appear that he was targeted, and the other men appear to have “no relation to the location at all,” police said in a statement. Pierson was the truck’s registered owner.

Police haven’t commented on any possible motive for the killings of the two men whose bodies were found in the pickup.

It wasn’t immediately known if Rhoden has an attorney who could speak on his behalf. His first court appearance was scheduled for Friday night.