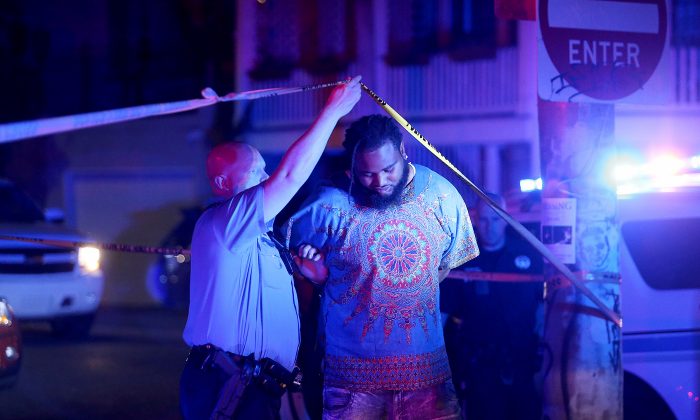 A man is taken into custody early Sunday following a shooting on April 9, 2016, in New Orleans. (Michael DeMocker/NOLA.com The Times-Picayune via AP)
Crime and Incidents

Warrant: Ex-saints Player Will Smith Was Shot in Back, Torso

NEW ORLEANS—Former New Orleans Saints player Will Smith was killed in a case of road-rage, by a Humvee-driving man who rear-ended his Mercedes and then shot him in the back and side, according to a police warrant read in court.

Cardell Hayes, 28, was ordered held on $1 million bond Sunday night after police arrested him on a charge of second-degree murder.

Smith, 34, was beloved by fans for helping the Saints win the 2009 Super Bowl, and for remaining in the community with his wife, Racquel, and their three children as New Orleans recovered from Hurricane Katrina. He had been enjoying a street festival Saturday, posting a photo of himself and his wife on Twitter and Instagram with the caption: “Having a blast at the #fqf2016 @ French Quarter Fest.”

At about 11:30 Saturday night in the upscale Lower Garden District, Hayes’ Humvee H2 rear-ended Smith’s Mercedes G63, pushing it into a Chevrolet Impala occupied by two of Smith’s acquaintances. Hayes and Smith argued, and Hayes shot both Smith and Smith’s wife, Racquel, police said. She was taken to a hospital with a leg wound.

The accident that police said touched off the deadly confrontation was the second within moments, defense attorney John Fuller explained outside the courthouse. He said Hayes ran into the back of Smith’s Mercedes while following a hit-and-run driver who had rear-ended his Humvee and sped off. Fuller wouldn’t say whether Hayes identified the Mercedes as the vehicle that had rear-ended him.

Hayes is not guilty of murder, and the story is more complex than the police account, Fuller said. He said Hayes called 911 after he was hit, and persuaded a witness who was about to leave to remain and talk to police.

Police spokesman Tyler Gamble told The Associated Press in an email Sunday that he had no immediate information about the witness or the 911 call.

Fuller asked for low bond Sunday night, noting that Hayes had waited for police, owns a towing business and is raising his 5-year-old son.

Magistrate Brigid Collins said she understood, but according to the warrant, “I’ve also got a gentleman who was shot in the back.”

Prosecutors have 60 days to decide whether to bring the second-degree murder charge against Hayes, who had a hearing scheduled Monday to inform the magistrate’s court of his permanent attorney. Fuller, who represented him Sunday, said someone else from his law firm will represent Hayes because he’s been appointed as a temporary judge starting May 2.

Hayes and Smith didn’t know each other, Fuller said, but like the NFL star, Hayes played defense, competing last year with the semipro Kings. The team offered condolences to Smith’s family and friends, and praised him as an example of the city’s “overwhelming kindness and generosity.”

“We are stunned and saddened by this senseless tragedy. The Crescent City Kings do not enable or condone violence in any shape, form, or fashion,” the team’s Facebook post said.

Hayes sued the New Orleans Police Department and six officers after police killed his father in 2005. Police settled the lawsuit in 2011. The settlement is confidential, said attorney Ike Spears, who represented Hayes in that lawsuit.

Smith was a standout player. A native of Queens, New York, played for Ohio State’s 2002 national championship team and graduated in 2005 with a degree in criminology.

New Orleans chose him in the first round of the 2004 draft, and he led the Saints with a career-high 13 sacks in 2009. Smith’s 67 ½ career sacks rank fourth in Saints history. The New Orleans Saints Hall of Fame says Smith had been unanimously voted into the hall last month.

Smith also was at the center of the NFL’s bounty probe in 2012, the last year he played in an NFL regular season game. The league concluded that he and fellow defensive captain Jonathan Vilma helped run a locker-room pool that paid cash bonuses for heavy and even injurious hits.

A year earlier, Smith served a two-game suspension for using a weight-loss product that included a diuretic banned by the league for masking steroid use.

Off the field, Smith established a foundation “to motivate, educate and provide opportunities for women and children.”

The Smith family said in a statement Sunday that they are thankful for the outpouring of support but want privacy as they grieve.