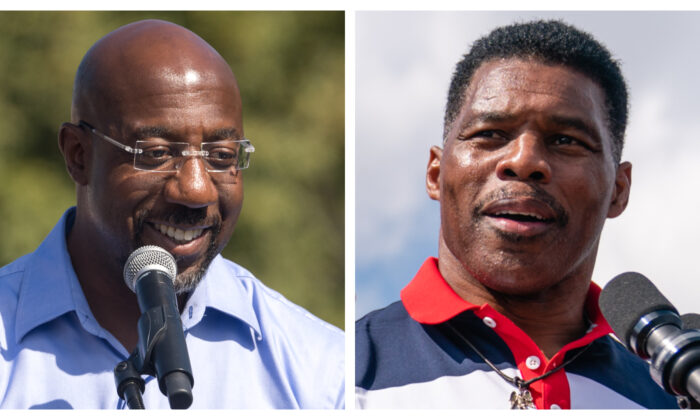 Sen. Raphael Warnock (D-Ga.) and his Republican challenger Herschel Walker are pushing hard for turnout as the two head into the Dec. 6 Senate runoff in Georgia.

According to a filing with the Federal Election Commission (FEC), Warnock had $29.7 million cash in hand as of Nov. 16, three times as much as Walker’s $9.8 million.

However, the advantage in campaign financing will not necessarily turn into polling site gains, as Walker is running a relatively economic campaign in one of the most expensive races.

Meanwhile, the Senate Leadership Fund—the super PAC connected to Senate GOP leader Mitch McConnell—also has over $11 million cash at hand which could be used for Walker’s campaign.

“Herschel Walker got outspent by over $70 million and there’s only a 35,000 vote difference in a state of 7 and a half million registered voters,” she told Fox News Digital.

All Eyes on Georgia

This makes the Georgia runoff not decisive for the Senate majority.

However, the runoff in the Peach State will still determine the margin that Democrats will have in the upper chamber.

If the Republican Party gains one more seat in the Senate, it would be easier for them to stop or slow down the Democrats’ push toward left-leaning policies with help from swing voters like Sen. Joe Manchin (D-W.Va.).

During his announcement of the 2024 presidential candidacy, former President Donald Trump called on his supporter to vote for Walker in the runoff.

“Despite the outcome in the Senate, we cannot lose hope and we must all work very hard for a gentleman and a great person named Herschel Walker, a fabulous human being who loves our country and will be a great United States Senator. … Get out and vote for Herschel Walker,” he said on Nov. 16.

Republicans in Georgia and all over the country have stumped for Walker in recent days.

On the Democrat side, Warnock announced that former President Barack Obama—an iconic socialist in the Democrat party—will campaign for him in Atlanta on Dec. 1.

“I look forward to welcoming President Barack Obama back to Georgia next Thursday,” he said in a social media post.

A Georgia judge ruled on Nov. 19 that early voting in the runoff election can take place as early as the Saturday two days after Thanksgiving.

The state’s election code requires counties to start early voting for runoff elections as soon as possible after a general or primary election and mandates when they can take place.

A lawsuit filed by Georgia Secretary of State Brad Raffensperger claimed the statute used to identify valid days to hold runoff elections prohibited Saturday early voting for runoff elections immediately after a “public and legal holiday” on a Thursday or Friday—in this case, Thanksgiving.

Warnock and Democrat groups, the defendants in the case, filed a lawsuit to challenge Raffensperger’s interpretation of the statute.

The defendants argued the statute doesn’t apply to runoff elections, only primary and general elections. The court agreed with this interpretation of the statute.

“When the Legislature first added the provision regarding advance voting on Saturday after a holiday, it named all three (3) categories of elections, specifically primary elections, (general) elections, and runoff elections,” Judge Thomas A. Cox Jr. wrote in his ruling.

“The Legislature updated this provision one year later and deleted the words ‘or runoff,’ while leaving only ‘primary or election.’ Within the context of these two very different interpretations of the same statutory language, the Court recognizes that there is an absence of settled law on this specific issue.”