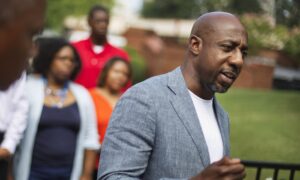 “As I got finished voting, I walked out and the Warnock bus pulled in. Warnock was on there, they had their whole entourage. They had all the mainstream media that were there—The New York Times. They just had all these followers, it started turning into what I called a circus. They were talking about getting free food, go vote and you can get free food off the truck. We have all this money we’re gonna win, we’re gonna kick your butts. It was something I’d never seen before as part of going to vote in a precinct here. I’m a native here of Cobb County, born and raised here,” said Ben Hickman, a Cobb County voter and poll watcher.

It didn’t take long before some Republicans confronted the Democrats with signs of their own. But Hickman says that approach was not welcomed in the least.

“We were there, I had some of my friends show up, we put up some of our signs supporting Senator Kelly Loeffler and David Perdue, and Trump and others. We were told to back up ‘you can’t get close to us,’ and we didn’t listen to them, of course, we were aggressive and wanted to be a part of it. Mainly because we wanted to also hear what Warnock was saying. He was there with these people, the type of messages that he was presenting, you know, just watching what the overall conversation was,” said Hickman.

Hickman also said according to a couple of his friends who were at other polling sites, it seemed as though Warnock’s team had a map and was doing something like a precinct tour.