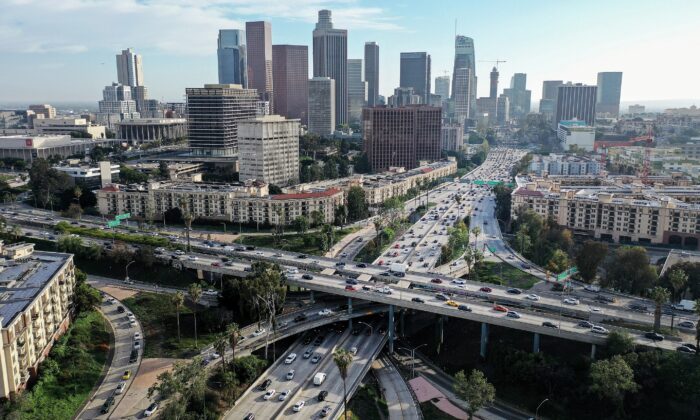 Warning: The Cars of Tomorrow Will Be Surveillance Vehicles

In his new book, aptly titled “Road to Nowhere: What Silicon Valley Gets Wrong About the Future of Transportation,” author Paris Marx explains why the elites in the Santa Clara Valley shouldn’t be let anywhere near our vehicles.

This should come as no surprise. Although a number of Silicon Valley’s most successful companies have made our lives more convenient, this convenience has come at a significant cost. We have traded sensitive data for expediency. Of course, this hasn’t stopped a whole host of Big Tech companies from teaming with car manufacturers.

Their aim? To turn our cars into data-driven prisons, with drivers being monitored closely and mined for sensitive information. You have been warned—the cars of tomorrow will look nothing like the cars of today. The speakers will have ears, and the dashboard will have eyes.

In 2020, BMW announced that it was collaborating with Amazon, a darling of Silicon Valley, in the hope of turbocharging data-driven innovation. Since the announcement, BMW has introduced a whole host of exploitative practices. As first reported by The Verge, the German multinational manufacturer is now hawking subscriptions for heated seats. If you’re an owner of a new BMW, a monthly subscription to warm your derriere will set you back $18 (or, if you want “unlimited” access, $415).

That’s what’s known as a microtransaction, a term once associated with gaming. A popular method of monetizing games, microtransactions encourage users to purchase virtual items with real cash. They are synonymous with those free-to-play games that pop up on your phone.

If the move to charge customers to heat their seats seems manipulative and highly unethical, that’s because it is. You see, in the case of the heated seats, as The Verge piece noted, “BMW owners already have all the necessary components.” However, BMW has decided to place “a software block on their functionality that buyers then have to pay to remove.”

The company also intends to tie other features to subscription-based fees, including heated steering wheels and its “IconicSounds Sport package” that “allows” drivers to play engine sounds in their cars for $117.

Meanwhile, Ford, the company responsible for creating the first genuinely affordable automobile, intends to turn cars into giant TV screens. In 2016, Ford teamed up with Google, AT&T, and Amazon and began shifting its focus to enhanced automobile software. As MotorTrend first reported, this involves the facilitation of in-car advertisements.

According to MotorTrend, the very same “onboard data connections proliferating throughout vehicle lineups that allow for built-in Wi-Fi and over-the-air vehicle updates” could soon become direct pipelines for in-car advertisements (check out the Ford patent here).

How would this system work? Basically, if you drive by a billboard that happens to be advertising french fries, for example, this advertisement will pop up on the vehicle’s screen. For each ad that appears on screen, the good people at Ford will receive some form of compensation. Other authors have spoken about Ford’s desire to become the Google of automobiles. A comforting thought for very few drivers, I imagine.

Then, there’s Tesla, the American multinational automotive and clean energy company that’s forever in the news. Last year, Tesla moved its headquarters to Texas from the leafy suburbs of Silicon Valley. Tesla, however, is still very much a Silicon Valley company at heart. You see, Tesla specializes in the production of electric vehicles (EV), and as anyone familiar with EVs knows, these smart devices on four wheels are far more software than hardware.

However, as The Street’s Luc Olinga reported, Tesla CEO Elon Musk wants to turn these smart devices “into living rooms on four wheels.” Instead of actually driving their vehicles, passengers will soon be encouraged to watch TV or play video games.

Earlier this year, Tesla announced that it would soon integrate Valve’s Steam, a video game digital distribution service, into its vehicles. The move would allow Musk’s company “to include more than 50,000 additional video games in its system, greatly expanding the choices available to Tesla vehicle owners,” according to Olinga.

Sure, gaming can be fun. However, it’s important to remember that video games have evolved. They are fast becoming Trojan horses designed to collect copious amounts of highly personalized data from unsuspecting users. With the introduction of wearable devices, including virtual reality (VR) headsets and haptic gloves, the collection of data has completely changed the video game industry. Over the next few years, data-driven gaming looks set to change the driving industry—and not for the better.

By 2025, researcher Bill Buchanan predicts, 60 percent of all the cars on U.S. roads will have internet connectivity, meaning the “opportunities for data mining are almost endless, especially as your drive to work has, possibly, been the only time that you have not been spied upon.”

The car, once a sanctuary for so many of us, looks set to become yet another data mining tool, yet another vehicle (quite literally) for surveillance.