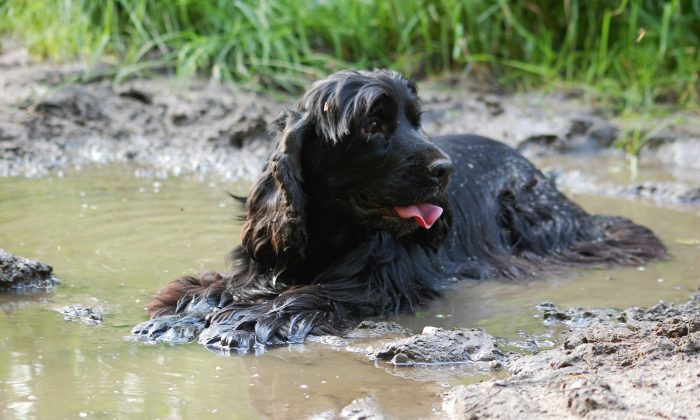 A dog owner in England issued a warning to others after his dog died when it apparently consumed blue-green algae in a river.

“Warning to all dog owners. We lost our pup today after she ate some blue/green algae at the River Conon. The falling river and hot weather has created a danger which sadly we were not aware of. All dog owners please be aware as this is such a tragedy for Bell and our family,” he wrote on Facebook.

Elaborating to the Press and Journal, he said he grabbed his son after walking two dogs on Dunglass Island near Maryburgh and “from the river to the pup dying could not have been more than 30 minutes.”

His son, Andrew, said Bell was swimming in the same area and had her head underneath the water and possibly consumed some of the algae.

The dog got sick when it returned home, adding that “within five or 10 minutes she started being sick, but she was yelping at the same time.”

He added: “We rushed her straight to the Dingwall vets. By the time we got her to the vets we could tell that the pup was nearly a goner and there was nothing they could do.”

O’Connor, a former Chief Superintendent with the police, went back to investigate the poisoning cause.

“That will be your culprit there,” the man explained, as O’Connor recalled.

Ian Muir, a vet who treated the dog, told the publication: “In this case, all the evidence pointed to blue-green algae poisoning. She had been swimming in it and had brought up what appeared to be blue-green algae.”

Muir noted that there are toxins in blue-green algae capable of killing a dog “in minutes.”

“There is no antidote,” he explained. “Some of it is more toxic than others and even if they recover they can sustain liver damage that is ultimately fatal.”

Muir told the Express that it was unusual that “the dog was poisoned by algae from a river … it’s a problem usually associated with lochs where the water isn’t flowing and there’s a chance for it to build up.”

In elaborating to The Express, O’Connor said: “We walked the dogs regularly along the river with no problem at all. Yesterday my son took them along the River Conon and came home. We could see right away that she was seriously ill. We took her round to the vets within five minutes and then she died.”

“The whole episode from start to finish took about 30 minutes,” he also said.

He added: “Because we have been getting no rain the river has been at a really low level and the algae has been left exposed which is very dangerous if it comes into contact with animals.”

In Canada, the CBC reported on July 14 that a dog might have died after coming in contact with the algae in the St. John River in New Brunswick.

“The presenting signs were so sitting with that, that I wanted to get the word out,” said Dr. Colleen Bray of the Douglas Animal Hospital. “This is the time of year that it happens.”

She thinks the dog came into contact with the algae after it swam in the river. The dog died about 25 minutes later.

In Minnesota, a dog died as a result of swimming in Rochester’s Foster-Arend pond. Officials also believe that blue-green algae was the cause of death, KROC news reported in July.

According to VCA Hospitals, blue-green algae is “also called cyanobacteria” and “is found in fresh and brackish water of ponds and lakes.”

The pet website says, “This microscopic bacteria can also grow in backyard fountains, garden pots, birdbaths, and anywhere water is stagnant. Regardless of where it’s found, blue-green algae is dangerous.”