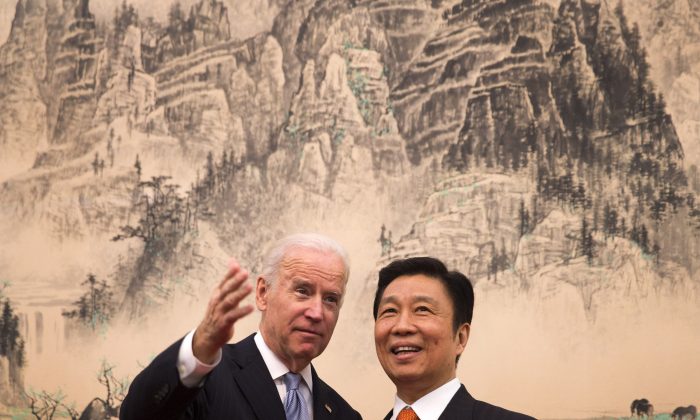 WASHINGTON—Sen. Mark Warner (D-Va.) recently said that “we have to wake this country up to what China is doing” and confront the Asian giant’s increasing cyber, economic, and military espionage.

“China is going to eat our lunch? Come on, man,” Biden said during a May 1 campaign speech in Iowa. “I mean, you know, they’re not bad folks, folks. But guess what? They’re not competition for us.”

Just how much distance there is between the highest-ranking Democrat on the Senate Intelligence Committee and the former Democratic vice president became clear in a May 8 speech by Warner at the Brookings Institution.

“Until a few years ago, my views of China were pretty similar to a lot of people in the business world,” Warner told the Brookings audience. “I looked at China—a rapidly modernizing country of 1.3 billion people with rising incomes and expectations—and saw mostly opportunity.”

Warner said he expected China’s rising prosperity to move it inevitably away from its Communist past to a “less authoritarian, more open direction” and to become a U.S. competitor and partner on the world stage.

“But a few years, and many, many classified briefings later, a lot has happened to fundamentally shift my viewpoint,” he said.

Warner now believes that “under President Xi Jinping, a newly assertive China is pursuing a sophisticated ‘whole-of-society’ strategy that exploits all elements of state power to strengthen its position in the world and diminish U.S. power and influence.”

To that ambitious end, Warner said China “uses all of the traditional tools of the state to exert influence: an expanded military presence, and the aggressive deployment of espionage to steal military and industrial secrets,” particularly from U.S. government and business.

“All of this has the stage for China to aggressively deploy every lever of power in service to the state—and, at the same time, exploit the openness of our society to gain geopolitical and economic advantage.”

And, Warner noted, “the national security challenges posed by a rising China are immense.”

Warner didn’t explicitly mention Biden, but he may have had him in mind when he observed that “for years, optimists in the U.S. were convinced Chinese efforts to regulate the internet would collapse, because they would stifle the freedom and innovation needed for economic growth, and because the task of censoring one billion-plus users seemed insurmountable.”

The Virginia Democrat reminded his listeners that it was President Bill Clinton who said regulating the internet would be like “trying to nail jello to the wall.”

But Clinton, “like many others, was wrong,” Warner said, and the reality is that “China has successfully and scalably built a censorship infrastructure that is the envy of authoritarian regimes around the world.”

China is now aggressively selling the digital equipment required to build and operate a successful censorship infrastructure to Venezuela, Ethiopia, Ecuador, and Pakistan, he said.

Biden’s perspective quickly drew fire from rival Sen. Bernie Sanders (I-Vt.), who wrote on Twitter that “it’s wrong to pretend that China isn’t one of our major economic competitors. When we are in the White House, we will win that competition by fixing our trade policies.”

Democratic strategists interviewed on May 16 by The Epoch Times were also unconvinced by Biden’s point of view on China.

“The fact is that the vice president’s comments were out of step with most Democrats in Congress,” strategist Jim Manley said. Manley was formerly communications director for then-Senate Majority Leader Harry Reid (D-Nev.).

“Letting them into the World Trade Organization (WTO) will go down in the history books as a major, major mistake,” Manley said, referring to the November 2001 agreement that allowed China to join the global trade group, which happened with bipartisan support in the United States.

Even so, Manley doubts the issue will affect Democratic primary voters.

“If you read the coverage from the early primary states, this issue is barely, if at all, mentioned, and I doubt that will change anytime soon,” he said.

Another Democratic strategist doesn’t see a serious rupture in the party, but there are problems and opportunities for the party in the Warner–Biden divergence.

“We haven’t hit an ideological ‘split’ yet, because Warner and Biden both have strong enough foreign policy credentials to make compelling arguments on how we should view China,” said Max Burns.

Few voters are likely to know the positions of either Warner or Biden, he said. That doesn’t mean, however, that Biden need not worry about whether he’s in tune with Democratic voters.

“But as Democratic presidential contenders lean on President Trump’s trade war with China, and we see China assume a bigger part of the campaign messaging, Biden’s rosy picture of U.S.–China relations will become increasingly difficult to defend,” Burns said.

Burns acknowledged that the China issue could become a central one in the 2020 Democratic presidential primary contests, but he noted that there is “political danger for Trump if it does.”

“China’s economic threat has the makings of a top-tier campaign issue. And Democrats can use the Trump administration’s own economic data to make a strong case that Trump’s trade war is making middle- and working-class America poorer,” Burns told The Epoch Times.

“It’s a gift to Democrats, who have the opportunity to put forward fresh new approaches for managing American interests against a rising China,” he said.

Strategist Jimmy Williams told The Epoch Times that “splits in foreign policy amongst senators isn’t unusual. What is unusual is assuming China sees us as some sort of supreme ally. They’re not.

“They engage in subterfuge, steal our technology and intellectual property, and coddle murderous dictators across the planet. To think otherwise isn’t reality.”

But the irony, according to Williams, a former senior economics adviser to Sen. Richard Durbin (D-Ill.), is “they can’t live without us and vice versa.”