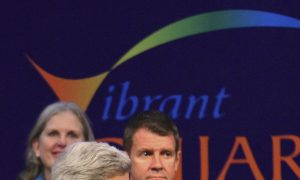 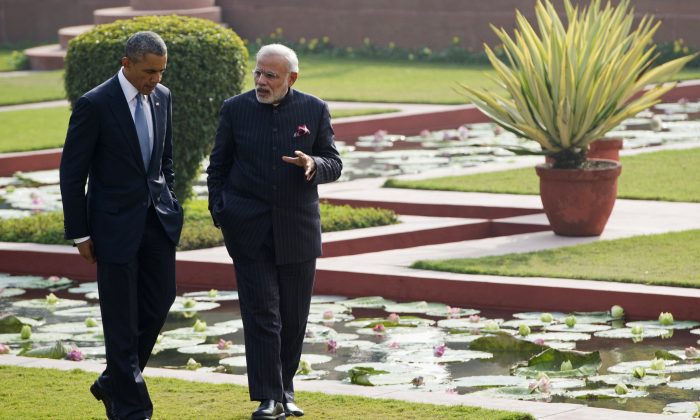 Indian Prime Minister Narendra Modi and US President Barack Obama walk through the gardens between official meetings at Hyderabad House in New Delhi on Jan. 25, 2015. Chinese media believed the tighter cooperation between China and the US is not going anywhere. (Saul Loeb/AFP/Getty Images)
China

According to China’s media, the personal warmth between President Barack Obama and Prime Minister Narendra Modi of India is a weak reed to build a long-lasting alliance between nations whose fundamental interests differ so much. With claims like this, China’s press has sought to downplay a U.S.-India summit that saw the two giants unite in measures opposing China.

The two leaders got off to a heartwarming start when they embraced each other like pals upon Obama’s arrival in India. When the two sat down to talk, they spent the first 45 minutes focusing on one topic—China.

A joint U.S-India statement called for the revival of a security network involving the United States, India, Japan, and Australia.

Together, the two leaders put their words on paper when they signed a joint statement, chiding the Chinese regime for provoking conflicts with its neighbors in the South China Sea.

The statement also called for the revival of a security network involving the United States, India, Japan, and Australia, as well as India’s playing a greater role to exert its influence in the Asia-Pacific Economic Cooperation forum.

However, none of the bilateral moves amounted to anything, according to the Chinese media.

“The shortened three-day visit is more symbolic than pragmatic, given the long-standing division between the two giants,” said an opinion article published on the regime mouthpiece Xinhua News Agency on Jan. 25.

Tackling climate change has been one of the top agendas for President Obama, who announced a new regulation earlier this month to cut down on the oil and gas industry’s emission of methane.

However, at the conclusion of the meeting of the two leaders, India and the United States announced tighter cooperation to deal with climate change, although India refused to set a specific number on emission cuts.

“Economic growth and eradication of poverty is more urgent for Indian officials than cutting carbon emissions,” stated Xinhua, since the Indian economy is still heavily dependent on burning coal.

“What lies under the superficial rapprochement is something short of a deal.”

An article titled “The US, Japan, India, and Australia Gang Up On China, But India Will Not Be a Pawn for the US” on the Chinese Internet portal Sohu on Jan. 29 stated that China doesn’t need to panic in the face of warmer ties between the United States and India.

Since economy is a top priority for Prime Minister Modi, who envisions making India a $20 trillion economy, foreign investment is going to play a huge role.

According to Sohu, the Indian government has secured a 50 billion yen ODA loan (about US$8 billion). An ODA loan, also known as a Yen Loan, is a long-term low-interest-rate loan advanced to developing countries by Japan.

India also obtained another 3.5 trillion yen worth of financial leases from Japan (about US$29.6 billion). Meanwhile, top Chinese leader Xi Jinping has promised to invest US$20 billion in India.

The United States is unlikely to match the size of China’s investment, stated Sohu.

India understands the importance of having a friend that is close by (China), rather than far away (the United States and Japan), according to Sohu. As a result, India, being practical while wanting to become a powerful nation, would never become a U.S. pawn by simply accepting the U.S. positions on issues such as the Indian Ocean and the Sino-Indian border, Sohu claims.

The United States and India are still on their honeymoon, considering that India’s prime minister visited the United States just six months earlier, said the state-run People’s Daily in an article on Jan. 26. However, their past history—the raw feelings between the two countries when an Indian diplomat was arrested in New York City in 2013 and the revoking of Modi’s visa back in 2005—would prevent the two nations from working closely.

The state-run Chinese newspaper was referring to the incident in December 2013, when Devyani Khobragade, India’s deputy consul general in New York City, was arrested on charges of submitting false documents and not paying her housekeeper a minimum wage. While in custody, Khobragade was strip-searched and treated like a criminal, which caused an uproar in her home country and a diplomatic tussle between the United States and India.

In March 2005, Modi, then the chief minister of Gujarat state, was denied entry into the United States—his diplomatic visa was denied and his existing tourist and business visa was revoked—on the grounds of his involvement in the riot in Gujarat in 2002, which resulted in over 2,000 deaths.

Immediately after President Obama ended his visit, Indian External Affairs Minister Sushma Swaraj is scheduled to visit China from Jan. 31 to Feb. 3, to discuss “bilateral, regional, and global issues of concern to both sides” with her Chinese counterpart Wang Yi, according to a press release from India’s Ministry of External Affairs.