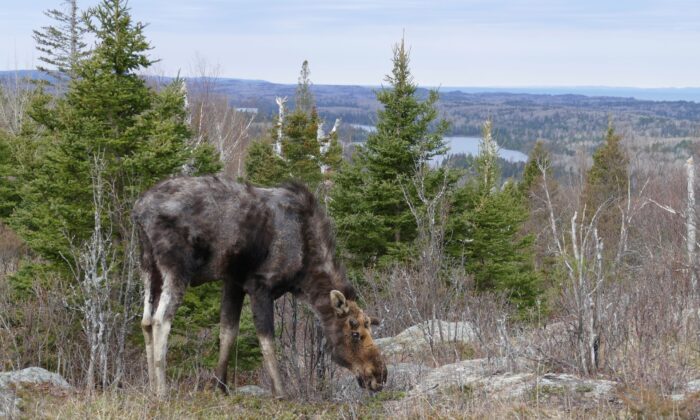 A moose is seen in Isle Royale, Mich., in this file photo. (Sarah Hoy/Michigan Tech University via AP)
Science News

TRAVERSE CITY, Mich.—It’s a ghastly sight: ticks by tens of thousands burrowed into a moose’s broad body, sucking its lifeblood as the agonized host rubs against trees so vigorously that much of its fur wears away.

Winter tick infestation is common with moose across the northern United States—usually survivable for adults but less so for calves, and miserable either way. And climate change may make it worse, scientists reported Monday.

Data collected over 19 years at Michigan’s Isle Royale National Park shows moose have more ticks during winters following particularly warm summers, according to a study published in the peer-reviewed journal Frontiers in Ecology and Evolution.

“We usually think about winter having a big impact on moose, but growing evidence suggests summer might be even more important,” Hoy said.

In addition to the partial loss of their bristly winter coats, tick infestation makes moose anemic and less able to reproduce, she said. It’s a leading cause of recent population declines in the Northeast, where summer temperatures have been surging more than in the Upper Midwest.

Much research on that topic has involved predator and prey relationships, he said. Vucetich, Hoy, and colleague Rolf Peterson have led the world’s longest-running predator-prey study in a closed ecosystem. It features moose and wolves on Isle Royale, a Lake Superior island park.

“But parasites are at least as important as predation,” Vucetich said. “To be a parasite is an easy way to make a living in the natural world.”

Previous studies have predicted wildlife migrating to different areas because of climate change will encounter parasites to which they haven’t developed immunity. Warmer temperatures are expected to help parasites develop faster and survive longer.

The researchers developed models with those figures, plus temperature and snowfall data and other information, to draw conclusions about climate change’s role.

Winter tick life cycles begin in June as each female lays several thousand eggs in soil. They hatch a few months later. Larvae crawl up forest and meadow plants and wait for hosts—preferably members of the deer family, which includes moose—to brush by so they can latch on.

Deer do better than moose at grooming themselves to get rid of the pests, the paper said.

The ticks feed on their hosts’ blood through winter, then detach and reproduce. Males die, as do females if they fall onto the snow-covered ground. If the ground is dry, females survive and lay eggs to start the next generation.

Previous studies of how climate change might affect tick-moose interaction have focused on milder winters, which give ticks more time to find hosts while boosting their prospects for successful egg-laying by reducing snow cover.

“But this new paper says, ‘Not so fast—these subtle changes during summers can be exacerbating some of these effects and you need to pay attention to that as well,’” said Michelle Carstensen, wildlife health program supervisor with the Minnesota Department of Natural Resources.

Carstensen, who did not participate in the study, said it’s enlightening, but she noted that Isle Royale has unique characteristics.

Its only moose predators are wolves, which nearly died out before officials began restoring the population in 2018 with mainland substitutes. Isle Royale has no deer, so its moose aren’t exposed to brainworm, a deadly parasite that deer carry. Hunting isn’t allowed there.

That helps explain why Isle Royale’s moose numbers have risen to around 1,800 in recent years, despite the ticks.

Mainland moose aren’t as sheltered. Few remain in northwestern Minnesota, where thousands roamed a few decades ago. In the state’s northeast, the population is down from more than 8,000 in the mid-2000s to 3,000–4,000 today.

Climate change may be eroding their ability to cope with disease and parasites, Carstensen said, although ticks have played only a minor role in the decline.

But ticks are rampaging in New England, which has by far the highest moose population in the Lower 48 states. They caused about half the calf deaths between 2014 and 2020 in Maine and New Hampshire, said Pete Pekins, a retired University of New Hampshire wildlife biologist.

“It’s like the worst Halloween nightmare of vampires you could imagine,” he said.

Because of environmental differences between regions, the Isle Royale study’s conclusions should be applied cautiously elsewhere, said Pekins, who didn’t participate. But they illustrate climate change’s influence on parasites and other perils for popular wildlife, including moose.

“Winter ticks are winning the arms race and your iconic species is losing,” he said.