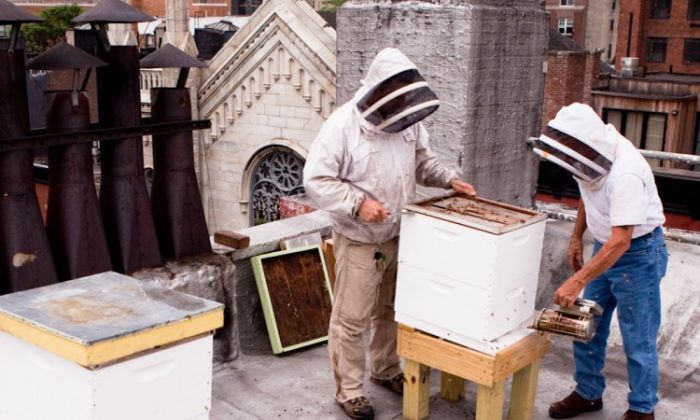 An early daffodil blooms from the small park at 90 Street and Second Avenue. (Courtesy of NYC Beekeeping)
US

The warm weather enables bees to leave the hive and fly, and mill around inside. Beekeepers want their bees to cluster and not waste energy or stored honey.

“When the night turns chilly, as many have, the bees may not cluster quickly enough, and some may die from the nightly cold,” says Jim Fischer, an event organizer with New York City Beekeeping, in an email. “The back-and-forth between ‘active’ and ‘must cluster to survive’ is very hard on the bees, and is certain to kill more hives than would survive a normal winter.”

A January National Honey Report issued by the United States Department of Agriculture’s also notes the increased activity among New York’s bee population and shows that many beekeepers have fed their bees more as a result.

“Most deaths occur during February and March,” said Andrew Coté, founder of two groups dealing with bees—the New York City Beekeepers Association and Bees Without Borders. “They’ve now eaten through their winter supply. On those days that it’s that warm [55 degrees] we’re going to go up and feed them.”

Winter is usually a hard time for the bees. Many die since they’re not indigenous. The Italian honeybee is the most prevalent type of honeybee found in the United States.

Tim O’Neal of Borough Bees said he hasn’t had a problem with the weather. “I leave my bees with more honey and feed less when I can. My bees still have 70 to 80 lbs of honey to eat for the next couple of months, which is enough.”

“Feed your bees if you want them to live,” Fischer, the event organizer with New York City Beekeeping, exhorts in an email sent to the group on Feb. 19 with the subject line “Non-Winter Continues.” He recommends a heavy liquid feed, which usually consists of sugar and water.

“While the bees may find pollen here and there, they are not likely to find any nectar at all in their speculative foraging,” he says in the email, which shows pictures of daffodils blooming around Central Park. “This may be the start of spring, or it may be only a head fake by Mother Nature.

“Honey demand has remained strong with an average price of $2.00 per pound in 55 gallon drums,” states the Department of Agriculture’s February honey report. “Reports from upstate [New York] have indicated a good early buildup of honey as well.”

In October, wholesale honey sales per pound ranged from $1.80 to $2.35 in the city. Many commercial beekeepers in the state moved their hives to the Southeast and Florida between September and November, according to the monthly reports. This, along with low yields in 2011, and a high price for bees, have kept demand high locally.