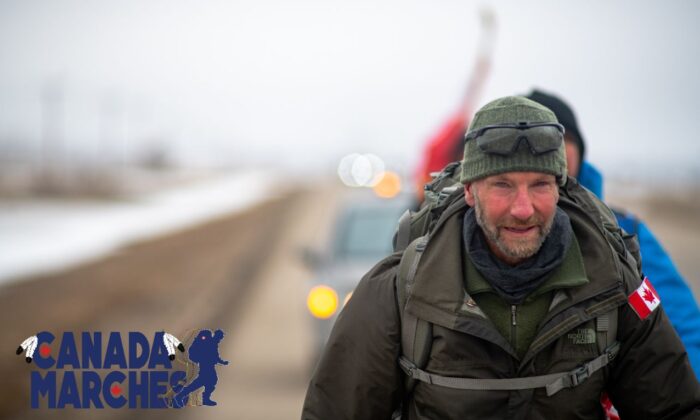 James Topp has enjoyed the warmth of Saskatchewan people, amidst unseasonal cold and winds.

The Armed Forces veteran and civilian employee for the RCMP was sidelined from both jobs for his refusal to take the COVID-19 vaccine. He began a 4,293 kilometre march on Feb. 20 from Vancouver to Ottawa to call for an end to vaccine mandates and the reinstatement of all fellow Canadians who lost their jobs due to the measures.

“Apart from the weather I had a really good reception,” the 28-year veteran said of his time in Saskatchewan.

Topp said he had some “emotional experiences” while speaking to supporters in Moose Jaw that had similarly suffered due to mandatory vaccination. He said it helped rekindle his motivation to speak out publically against mandates.

“Just the mindset that I was in, and standing in front of a bunch of people and baring your soul to them—it was difficult and I felt it. I came to the realization I was suffering psychologically. And then I realized that I wasn’t the only one,” he said.

The city of 33,890 is the home of Royal Canadian Air Force aircrew training, a flight training school, the Snowbirds demonstration squadron, and also the principal site for NATO flight training in Canada. Topp says unvaccinated armed forces members like him have gone through similar problems there.

“Folks there on that base, those who have taken the position I have, they’re being ostracized within their own community, which is tragic, it really is,” he said after visiting Moose Jaw on April 18.

“What I appreciate most is the fact that he is one of us. He is a Canadian who feels passionately about something and has had the courage to step out; do something different. And just that quality of being bold, and doing something that you believe in is special, and it’s an example that needs to be shown,” Van Dijk said in an interview.

For the veteran, it topped a hat trick of good events in three Saskatchewan cities.

“Swift Current too was a good experience, Moose Jaw, Regina—more and more folks than I would have thought would come out. I’m frequently surprised at how many people are responding to this journey,” Topp said.

He says a “really touching” memory from his journey through the province was when a young girl named Jade handed him a picture she drew and sang him a song about freedom that she composed herself. The video of Jade’s performance was posted to YouTube on April 23 with the comment, “The weather might be cold in Saskatchewan, but the people are so very warm.”

The same day, Topp’s march was cut short at the 31 km mark as 80 km wind gusts and zero-degree temperatures made it difficult to continue. A snowstorm that evening caused power outages and closed roads in southeastern Saskatchewan, and kept Topp waylaid at a hotel in Moosomin until he could resume his march on April 25. He walked 55 kilometres that day, the longest of his journey thus far.

Topp has been accompanied by eight people, none of whom he knew before his journey began in February. He calls them “family,” though sometimes new friends join for short sections of the trek.

“Here in Saskatchewan anyway, it’s been remarkable, even in rural areas. People will drive up and jump out. They found that I was passing through and they want to participate. And they come along for a few kilometres or for the day,” he said.

“I couldn’t have imagined this, it turning out this way. This is the Canadian public for real, taking an active part in this because there’s obviously a need for this.”

Topp reached the Manitoba border on April 26 near the 2000 kilometre mark of his journey and expects to get to Ottawa in June. His team has been diligently attempting to set up meetings with MPs and asking others to make their voices heard.

“One of the reasons why I’m going there is to speak on their behalf. And they come and tell me their issues, including service members… [The unvaccinated ones are] struggling to keep their job so they can feed their families. It’s happened numerous times,” Topp said.

“The point of this [is to] go and establish this dialogue, talk to the members of parliament and the public officials to tell them: ‘This is the damage that’s been done; they feel that you’ve abandoned them and you’re not listening, and this needs to be repaired.’”

Topp’s whereabouts can be tracked at Canadamarches.ca or the Canada Marches Facebook group, which has 15,000 members.