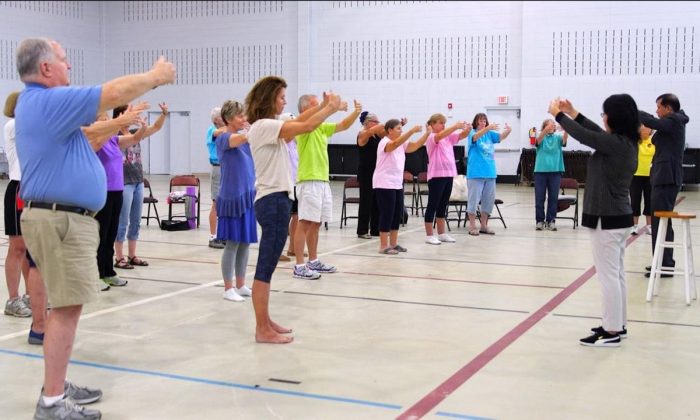 “I feel really good, I’m ready to deal with the five year old.”

Kelly Moshina was beaming after attending her first “Falun Dafa Cultivation and Meditation” class on Sept. 7.

“I learned a lot. I want to put what he taught into my daily life, into everything I’m doing, and try to have tolerance and compassion, just like that.”

The short, not-for-credit course, taught by Dr. Frank Tian Xie at the University of South Carolina, offers a window to the “meditation culture in the Orient,” through a closer look at one of the ancient meditation and cultivation practices called Falun Dafa (also known as Falun Gong) in four class sessions, according to a course syllabus provided by Dr. Xie.

New Book Looks at the Science Behind Falun Gong

Xie, John M. Olin Palmetto Professor of Business at the University of South Carolina Aiken, has been an avid Falun Dafa practitioner for over a decade. Xie said he has benefited from the practice profoundly, both in health and mind, and he always felt it a loss not being able to share the benefits with others. Thus when the associate provost at the university asked faculty if they would like to offer a short course in the university’s Academy for Lifelong Learning, Professor Xie leapt at the chance.

“This seems to be the optimum plan that I can think of,” Professor Xie said in a paper he read to a Falun Dafa conference, adding that it provides a wider platform while avoiding the “hassles of the regular course.” “Not only is the course offered to faculty and students on campus, citizens off campus can have access as well,” Xie said.

The course drew a diverse student body and quickly saw 29 people register. Students included  a scientist, housewife, a former president of the university, as well a member of the Academy of Lifelong Learning—the hosting organization. The classroom was moved to a gymnasium to accommodate the popular demand.

Many students came away feeling both uplifted and educated.

“This is just so much better for meditation,” said Moshina, a Yoga practitioner.

“I could feel the warmth in my hands as Dr. Xie was participating in leading us in the exercises, and I thought that was really wonderful,” head of the Academy Linda Soyars, who had some Tai Chi experience, told NTDTV.

“It’s our first class for the semester. It will be one of the best I think,” she added.

Despite its popularity in the west, Falun Dafa, the self-improvement discipline whose teachings center on the principles of truthfulness, compassion, and tolerance, faces a chilling reality in its country of origin. China, where the practice originated, once saw nearly one in 13 people practicing, before the regime targeted the practice for eradication in 1999. Minghui, a clearinghouse for the persecution of Falun Gong, has collected alarming accounts of forced labor, physical torture, brainwashing, and organs harvested from living practitioners.

Moshina said it was very sad that so much death has been inflicted on people doing something so beautiful and positive.