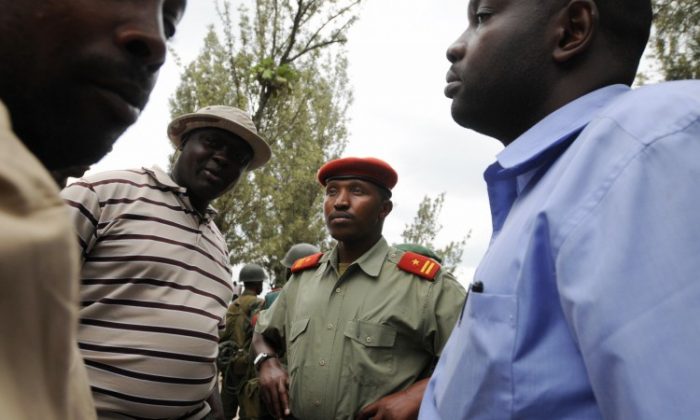 Warlord Surrenders: Congo’s ‘The Terminator’ Shows up at US Embassy

Notorious Congolese warlord Bosco “The Terminator” Ntaganda surrendered on Monday, just months after his forces launched an offensive on several cities in the Congo before they split.

Ntaganda, who is wanted by the International Criminal Court (ICC) for war crimes, including recruiting child soldiers, showed up at the U.S. Embassy in Rwanda and asked to be transferred to The Hague-based court.

He is said to have been one of the heads of the M23 rebel movement that advanced on Congolese cities several months ago. The rebels eventually withdrew and essentially disbanded.

State Department spokeswoman Victoria Nuland confirmed that he walked into the embassy in Kigali on Monday.

“I can confirm that this morning Bosco Ntaganda, an ICC indictee and leader of one of the M23 factions walked into U.S. Embassy Kigali,” she said, according to a transcript.

She added, “He specifically asked to be transferred to the ICC in The Hague. We’re currently consulting with a number of governments, including the Rwandan government, in order to facilitate his request.”

Nuland said that the United States did not have any advance notice that Ntaganda would plan to walk in the embassy. Previously, his whereabouts were unknown.

“It sounds like it was something that happened this morning, and we are endeavoring to meet his request,” she said.

It is unclear why Ntaganda chose to surrender after he spent years as a fugitive. However, the move comes just days after his ally, Jean-Marie Runiga, was detained by Rwandan authorities, according to The Associated Press.

Ntaganda faces charges including conscripting child soldiers, persecution, murder, sexual slavery, and rape while he commanded forces during the 2002 to 2003 conflict in northeastern Democratic Republic of the Congo.

Congolese government spokesman Lambert Mende told Reuters: “We’d prefer to have him judged here, but if he is sent to The Hague, that’s no problem either. The most important thing is that justice is served.”

The ICC has been seeking his arrest since 2006.