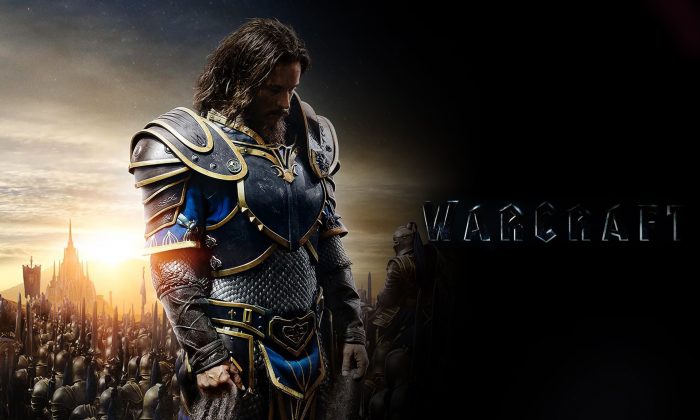 ANAHEIM, Calif.—The director and cast of “Warcraft” are hammering down on BlizzCon.

A trailer for the film adaptation of the long-running interactive fantasy series debuted to thunderous applause Friday at the fan convention.

The footage teased the tusk-filled, armor-laden conflict between orcs and humans that has been depicted in the 11-year-old online role-playing game “World of Warcraft” and the original “Warcraft” games from the 1990s.

“That was incredible,” said Jones backstage after the unveiling. “I’ve been working on this movie for three years and coming to BlizzCon for the past five years. I know this crowd from both sides, so it was fantastic to be able to finally show them in person and release the trailer online for everyone who couldn’t be here.”

Jones, the filmmaker behind the critical sci-fi successes “Moon” and “Source Code,” said he understands winning over the BlizzCon crowd is only half the battle.

“We have to convince people who aren’t fans of ‘Warcraft’ that this is a movie that they’re going to understand, enjoy and love,” said Jones. “I keep telling everyone here that this is an opportunity for those who love ‘Warcraft’ to communicate to everyone else exactly what it is they love about ‘Warcraft.'”

Despite the game series’ 20-year-old history and die-hard fanbase, Foster said he was undaunted when tackling the role of the magical Medivh. He didn’t care that “Warcraft” was a game before a film.

“It doesn’t matter,” said Foster. “It’s about two sides of a war. There’s compassion on both sides. To me, that felt like a worthy way to spend a few months in a very accessible way. If you can use the engine of big dollar Hollywood to talk about both sides of a war, that feels exciting. By the way, nobody did it for free.”

Patton, who plays the half-orc, half-human Garona, acknowledged one of the biggest challenges of her part was attempting to act while wearing pointy ears and tusks. She would take them home to practice.

“My son loved it,” said Patton. “He would call me orc mommy. I would tape my pointy ears on him and rehearse my lines with the tusks on while cleaning the house or whatever.”

Ahead of the “Warcraft” trailer debut, Activision Blizzard Inc. announced plans during an investor meeting at BlizzCon to create and release its own film and TV series based on the “Call of Duty” military shooter franchise and the “Skylanders” toy-game series.

Activision Blizzard partnered with Legendary Pictures to produce “Warcraft,” which is set for release June 10 and will be distributed by Universal Pictures. Jones said he’s envisioned with Chris Metzen, Blizzard’s chief of story and franchise development, that the film could be the first installment in a film trilogy.